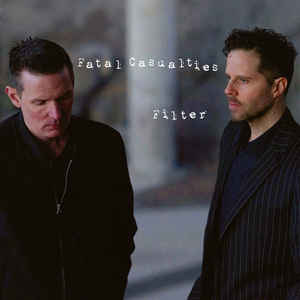 Background/Info: Swedish duo Stefan Ljungdahl and Ivan Hirvonen are back on track and have released their third album since their comeback in 2010. The band became one of the flag holders of Seja Records and always has composed an intelligent electro format mixing dark-electronics carried by slow cadences and more cinematographic- and experimental genres.

Content: “Filter” is an interesting title for a work where I got the impression Fatal Casualties filtered some of their initial influences. The band once got compared to Klinik on their debut work while “Filter” clearly sounds like it is moving towards more sophisticated and experimental styles.

The sound remains electronic, but with a more minimal approach. It’s more into atmospheric creation and cinematographic passages, revealing fascinating parts and great sound treatments. It’s mysterious-like and into dark-reverie while sometimes carried by industrial sound treatments and other analogue-like manipulations.
The vocals are really soft and sometimes remind me a bit of Edward Ka-Spel. It however is the perfect match with the sound.

+ + + : Fatal Casualties seem to be always in search of new ideas and different sensations. I think they fully succeeded in this quest –for so far it was intentionally, delivering a few new overwhelming pieces. The cinematographic aspect of the work is definitely one of the main evolutions, which reaches a climax on “Homo Erectus”. Another noticeable song is “Saga”, which is driven by a slow rhythm and accomplished with great sound atmospheres clearly appearing to be the main element of this work. Even the guitar playing by a guest musician on “Unknown Place” is into this ambient aspect.

– – – : “Filter” is what I should call a ‘difficult’ album. It’s the kind of work you have to listen a few times before getting into it. It also is quite different from previous productions, which will for sure catch the attention of new fans… but on the other hand, maybe losing a few older ones. I think the artwork –especially from the front cover, could have been more original.

Since you’re here … … we have a small favour to ask. More people are reading Side-Line Magazine than ever but advertising revenues across the media are falling fast. And unlike many news organisations, we haven’t put up a paywall – we want to keep our journalism as open as we can. So you can see why we need to ask for your help. Side-Line’s independent journalism takes a lot of time, money and hard work to produce. But we do it because we want to push the artists we like and who are equally fighting to survive. If everyone who reads our reporting, who likes it, helps fund it, our future would be much more secure. For as little as 5 US$, you can support Side-Line Magazine – and it only takes a minute. Thank you. The donations are safely powered by Paypal.
Tags: Fatal Casualties, Klinik