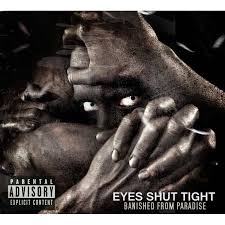 Content: It all started a few years ago for this Hamburg based band. They got the opportunity to release their debut work on Danse Macabre and are now finally joining Hall Of Sermon.

“Banished From Paradise” clearly indicates the dark inspiration running through this band. I got some paintings of Carravagio in mind when evoking the theme behind this album title. The album starts with a pure inferno-cadence joined by heavy guitar assaults. Some electronic arrangements are noticeable while the chorus of this opening cut is terrific and mind-blowing.

The guitar playing definitely reveals the real inspiration behind this work, which is mixing elements of rock-, metal and gothic music. It all sounds dark and enraged, which is an aspect that also comes through in the production of the vocals. Eyes Shut Tight brings a merciless work, but with some quieter and moody passages as well.

It all feels a bit like the duality between good and evil, but they especially excel at the harder parts and the solid choruses. “You Live Through Me” is a noticeable song in this vein.

“All My Sins” is one of the most noticeable cuts, which make me think to an offspring between Marilyn Manson and Depeche Mode. There’s a great progression running through this song, which is characterized by a rough and fat sound. The few songs coming next reveal the merciless aspect of this band, but still a great production in the fuzzy and metal minded guitar playing on “Open Mind”.

The guitar playing and production is absolutely divine and I want to tip the title song as most representative song. The guitar riffs sound pretty deep, which totally fits to the dark bass line running through this song. The evolution is absolutely magic and sounds a bit like pop elements overloaded by metal riffs. This song makes me think of IAMX going metal.

The last cuts are more into goth-metal influences and I here again can’t get away from the impression to hear some M. Manson elements laced through the song. “Intensity Of Pain” is a great apotheosis. Notice by the way that this album was produced by Lacrimosa guitarist JP Genkel who’s the frontman of Black Moon Secret.

Conclusion: The new opus by Eyes Shut Tight is a real nice surprise revealing a band that has seriously improved and empowered their compositions during the years. This album features several irresistible tracks.