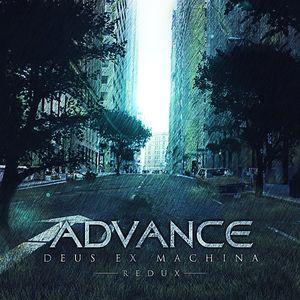 Content: “Deus Ex Machina” was the first album released by AnalogueTrash Records. One year after the release of the album we get a “Redux”-version including an extra disc.

Advance is hailing from Glasgow and is driven by Tom Perrett. The band claims to be inspired by some of the most famous future-pop bands, which is an element you clearly will recognize in their work.
The 1st disc is a good opportunity to (re)discover the 9 original songs of the album. “Deus Ex Machina” is not exactly the most inventive title for an album although it remains inspiring. That’s precisely what the opening songs are showing, but I was mostly impressed by the professional and overwhelming sound production.

Elements of EBM, future-pop and a few technoid elements have been mixed together. “Weapon Of Choice” reminds me a bit to the complexity and efficiency of Covenant, which seems to be another source of inspiration. The rest of the album is not exactly similar to this opening piece, but the writing and production both remain impressive.

“Fractured Existence” is a great song of heavy electronics and blasting sounds. This is not about typical pop music or EBM, but a kind of hybrid featuring multiple influences while carried by an impressive lead. Tom Perrett’s particular timbre of voice is another noticeable element of the production.

“The Road” again reveals the potential of this album, which again is carried by an overwhelming lead and cold electronic tones resulting in a pure power-pop style. There are noticeable elements of future-pop music and I here especially refer to Neuroticfish as a potential source of inspiration. It’s a fine production covering different electronic grounds. Some passages are more into melancholia, becoming a little bit softer (cf. “Enter The Wastelands”) while other parts are more into future-pop reminiscences (cf. “Dead Technology”, “New Objective”).

Any good album also needs at least one potential hit it and I here have to tip “Divine Machines”. This is an astonishing piece of music made of great sound sculptures and a perfect merge between future-pop and techno-trance ingredients. The samplings were replaced by sampled-robotic parts, which match with the music.

The 2nd disc features 9 remixes and 2 ‘new’ songs. Most of the remixers are not exactly the most famous names active in the scene, but I like this concept, which makes us discover new- and/or less famous names. The result is quite interesting as there’s a real diversity in the remixes moving in between powerful versions and moodier remixes.

Terminal Defekt is not exactly the most famous name, but their remix of “Fractured Existence” is a hard dancefloor version. In a similar ‘hard-pumping’ style I have to mention the outstanding remix of “Weapon Of Choice” by the promising nTTx –which also made a great remix at the new EP of Stars Crusaders.

Label mates Atomzero remixed “The Road” by injecting some extra EBM power. A last remix I want to mention is “Fractured Existence” by Unity One, which is more into the future-pop style.

I just regret there’s no remix of “Divine Machines”, which simply is the best song on the album.

About the 2 new songs left I first will start with “Apathy”, which is a great new cut in the line of the album. It sounds quite power-pop and future-pop like while you here again will discover a great lead. “Frozen” is a cover version of the famous Madonna song. It always is a challenge to cover such a ‘universal’ hit, but Advance did it in a surprising way. The cadence is quite fast while there’s a kind of sonic outburst during the chorus with powerful vocals on top.

Conclusion: The main album remains a great discovery, which for sure will appeal for future-pop lovers although “Deus Ex Machina” is much more than simply future-pop. The bonus disc features several cool remixes plus an excellent new song and a cool cover. This band has the potential to become a real ‘big’ one!