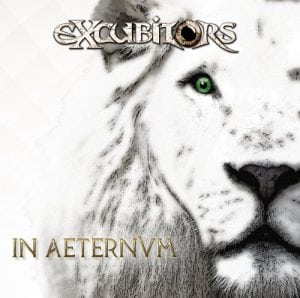 Background/Info: The German band Excubitors are back on track unleashing their fourth full length. Set up in 2006 by the brothers Sascha- and Stephan Viereck the band is now featuring new member Ronny Strehmann. “In Aeternum” was inspired by our society and made in memoriam of Sascha’s late son.

Content: Excubitors never has dealt with the most typical electro-pop format. The sound is based upon strong and intimate ambient passages, sometimes giving a dark touch to the songs. But other songs are a bit harder, sometimes touching ground with EBM elements or carried by heavier, bombastic drum sections.

Most of the songs are sung in their Mother tongue, but you also will discover a few English sung cuts.

+ + + : I like when electro-pop formations are trying to innovate or simply bring something different from the ‘mass’. That’s what Excubitors stand for. The songs are also well-crafted and elaborated while they take care for great sound treatments. There’s absolutely nothing to say about the artistic approach of the band (which they also reflect in the artwork). I personally prefer the more up-tempo cuts, sometimes accentuated by an EBM touch (cf. “Vergebung feat. Schwarzschild”, “Run Away”. )

– – – : There are a few cool and noticeable songs, but unfortunately I can’t find a potential hit. That’s maybe what this album is missing to get a wider recognition.

Conclusion: “In Aeternum” is a sensitive and even emotional work, which also sounds like an antidote to electro-pop clichés.