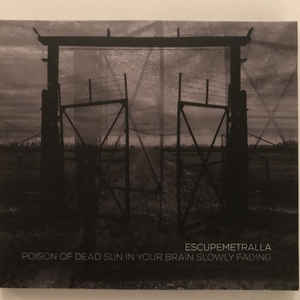 Background/Info: Escupemetralla is a Spanish duo from Barcelona that was active during the late 80s and early 90s releasing their music on the good-old cassette format. The band seemed to have disappeared afterwards, but here they are again. This work has been composed in the future… in the year 2025!

Content: Escupemetralla was totally unknown to me and even if I don’t know when and where the songs of this album have been really written, it’s an interesting discovery. The cold and analogue sound treatments bring us back to distant years when electronic and industrial music was pure experimental. The songs have been achieved with different influences, moving from dark-ambient to industrial to pure ambient. A few spoken dialogues have been added while you’ll also notice pitched vocals (maybe samplings). The album has been divided in two different sides: a ‘transcendent side’ and a ‘political side’.

+ + + : “Poison Of Dead Sun In Your Brain Slowly Fading” is an interesting piece of music for its retro-like sound format mixing electronics, industrial and ambient while in the end it all remains minimal and experimental-like. I like the coldness hanging over the songs, but also a part of mystery emerging at a few cuts. I especially like the trumpet sound running through “Echafaud Temporel Spectral”. The most noticeable track however appears to be “Poison Of Dead Sun” for its extremely dark and tormented aspect.

– – – : I have to admit this album has been a real cool surprise and I sincerely regret to not know that much from Escupemetralla. The band name is not exactly the easiest one to keep in mind; referring to an anarchistic song from the 1930s. My main regret is that there are maybe not enough climaxes on the album.

Conclusion: This album definitely goes back to the early years of underground electronics, a time where artists were much more creative with their equipment than today!