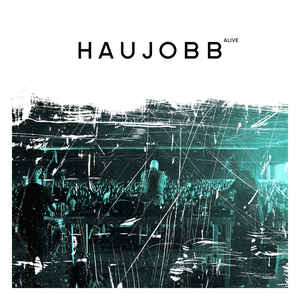 Background/Info: Haujobb celebrates their 25th anniversary by a fine selection of 15 live songs that were recorded during different performances. German duo Daniel Myer – Dejan Samardzic have chosen some of their biggest hits and songs that have been always positively received during their numerous live shows.

Content: “Alive” is a kind of ‘best of’ selection getting back to some of the early successes of the band, and also to some of the most noticeable songs from their last studio album. The live recordings made sense and are perfectly transposing the studio work towards the stage performance. Music and vocals are in perfect harmony with each other.

It also is an opportunity to remind us of some of the band’s most famous hits, but first of all the exceptional sound intelligence of Haujobb. This band had something visionary and totally avant-garde like compared to the other bands from their early years. It’s impossible to label Haujobb as one particular music style, but it always has been intelligent music mixing different influences together.

+ + + : What especially impressed me is the production of the vocals. I was not a huge fan of Daniel Myer singing live during the early years of the band, but this album reveals the charisma of the singer merged with the sophisticated compositions. Haujobb are truly sound architects who have created an own and icy electronic genre, which has been less emulated. That’s probably because the sound is too complex and still very accessible. From songs such as “Eye Over You” to “Antimatter” to “Dead Market” to the more recently released “Produkt” and “Input Error” this work confirms the genius of Haujobb.

– – – : You can always discuss about the selection of the tracklist when it comes to release a ‘live’ album or a ‘best of’. I personally regret there are no more songs from the very first albums. I however think it could have been a better idea to release a CD-box including a ‘best of’ next to live tracks and eventually previously unreleased material.

Conclusion: It was high time a band such as Haujobb finally got a kind of ‘best of’ album. And even if it’s a live opus it will definitely remind you of the visionary side of this formation.