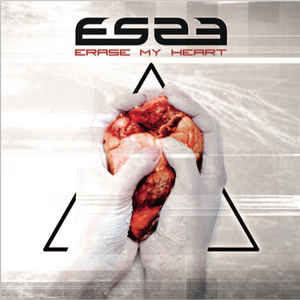 Content: “Erase My Heart” moves on where “Mutatio Ex Machina” stopped. I think we no longer can speak about pure dark-electronics. The songs are too melodic and clearly future-pop driven to only appeal to dark-elector heads.

+ + + : ES23 is a band in constant progression and that’s definitely an aspect I like and fully support. This artist is not emulating his previous work, but likes to look forward by experimenting and elaborating new ideas. This album is a very efficient merge between different electronic styles like dark-electro, EBM and future-pop, but it also reveals a mature sound writing. Next to the carrying melody lines I also like the global sound production. This is the kind of work that might appeal to different electronic lovers. Among the remixes I especially like the one of “Erase My Heart” by [SITD] .

– – – : ES23 is maybe sitting in between two chairs; the music genre is not 100% clear, but rather a hybrid between different genres. It might become too dark and hard for electro-pop fans and too melodic for (h)el(l)ectro lovers.

Conclusion: The least I can say is that Daniel Pad is an intriguing sound architect who seems to construct sonic bridges between different genres. I think his work has enough potential to bring fans from different genres together and make them dance!