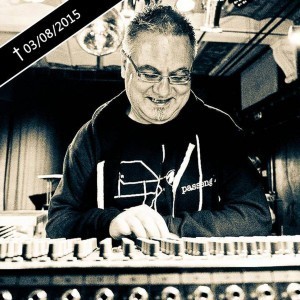 (Photo by Mélanie Detry – manipulated by Metroland) The death of Louis Zachert keeps on moving a lot of people who have known him personally. In a short but strong statement the Belgian electronic group Metroland have expressed their sadness: “Words fail with the loss of Louis Zachert, our very own beloved and amazing Passenger L. His final touches on all of our music has had a definite impact and in most cases made a world of change over the last two decades. It’s with tons of grief and disbelief that we are forced to say goodbye to one of our closest and oldest friends since 1994! Things will never sound the same again. Forever friendship!” Metroland’s Andy Dedecker also added a video online shot during Ionic Vision’s recording sessions for an album that never got released under Ionic Vision and which shows Louis Zachert at work, having fun, having lunch and so on. Some real behind the scenes footage.

Louis Zachert, also known as Metroland’s Passenger L (or Brother Louis), passed away in his sleep 2 days ago.

Also Axel Kleintjes – with whom Louis formed Cycloon – posted a message: “I can not believe it – I am stunned. Louis … You were the one who showed me that musical art basically knows no boundaries. Our time as Cycloon was one of the best experiences that I was able to do as a musician. Your patience and your understanding of others’ ideas has always been incredible. I am grateful that I worked with you, and know I could learn from you. Take care, Louis!”

Louis Zachert’s musical career spans many years, including a solo album “Vie!” (1992) under his own name, a lot of sound engineering work on Ionic Vision releases (“The End”, “Sweet Isolation”, “Complete Isolation”) and albums under the Cycloon name together with Axel Kleintjes (“Plasma Fusion”, “Head|Over|Now”, “Zeitseize “, …) and so on. Many of these releases are now impossible to find and have gotten a second life on eBay reaching incredibly high prices. Via his UnderTheRoof – Audio Mastering studio Louis Zachert kept himself very busy working with other artists like David Rey, Inertia, Digital Factor, Leo Nocta, Ortta, Bye Bye Leader, Amaury, Philine, Jean Delouvroy, Buenas Ondas, No Sunglasses, Darkmen, Teradélie and so on.

Our Side-Line reviewer co-editor in chief Stephane Froidcoeur aka Deranged Psyche was particularly touched by Louis’ “11000 Virgins” album which was released under the Black Wedding moniker in 2008: “He was a real kind person with a great musical knowledge; it always was a pleasure to meet him and I’ll remind him for his genius Black Wedding album.”

The sadness is everywhere but the good memories will prevail. Bis später Louis!