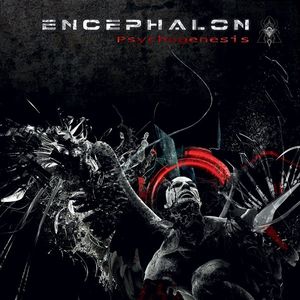 Content: Four years have passed since the debut album “The Transhuman Condition” by Encephalon. It took them 3 years to accomplish their latest work and the least I can say is that it was worth the wait to welcome “Psychogenesis.”

This Canadian based band contributed to the recently released label sampler “Dependence 2015” featuring the terrific “Illuminate.” This song is an absolute smasher and without a shadow of a doubt the best track of the album. This song is a hit for its perfect match between powerful EBM vibes and a divine electro loop revealing a cold melodic tune. It sounds hard and rough on one side and complex and refined on the other side. I think that’s what perfectly summarizes the content of the new Encephalon work. The band seriously gained in power, but it’s the entire production which also became more elaborated and coherent. “Psychogenesis” is a constant succession of heavy, but brilliant songs while the main sources of inspiration are still focused around technology.

I can’t really say that it’s pure EBM-like and not exactly the typical kind of dark-electro production. The work features both influences while there also is a flavor of agreppo throughout a few songs. I’m referring to the outstanding “Ultimate Breed,” which might be considered as a new standard of modern EBM. This song also is an opportunity to say a word about the powerful and charismatic vocals by Matt Gifford. Another song I have to mention is “The Descent,” which makes me think to a kind of ‘hybrid’ between Covenant (for the meticulous and sublime sound treatments) and FLA (for the power and typical Canadian touch). But in the end I can say that there’s not a single song to throw away. Encephalon took me by surprise releasing an outstanding opus.

Conclusion: No doubt about it, “Psychogenesis” is a real masterpiece that will increase the popularity of Encephalon. This is an intelligent and elaborate electronic work striving for modernism.