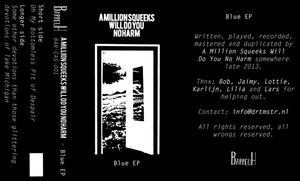 Content: A Million Squeeks Will Do You No Harm definitely sounds like one of the weirdest band names I’ve heard in quite a long time. Behind this solo-project based in Eindhoven (The Netherlands) is hiding one of the owner’s of Barreuh Records, Mike Dobber. This artist has already been involved in several projects, but it all looks like you really have to be familiar with his work to know the man. Barreuh Records also is a small and pure underground label devoted to obscure sound formats that they try to spread worldwide.

The least I can say is that this new work by A Million Squeeks Will Do You No Harm definitely leads us into the depths and darkest corners of experimental music. I think it’s not much of a coincidence if this cassette has been limited to 30 copies! The “Short Side” reveals a cool, but dark electro loop, which is the main basis of the cut and which sounds pretty soundtrack-minded.

I personally prefer the single track at the “Longer Side”, which sounds more elaborate and consistent. It again makes me think to a soundtrack composition for an imaginary movie/documentary, but it also reveals the real ‘nature’ of the artist who likes to manipulate and experiment with sounds. It sounds a bit in contrast with the kind of piano part running through this cut as well.

Conclusion: “Blue” reveals an interesting dimension of experimental- and ambient music while it also reveals a rather accessible side of noise.

Best songs: “Some Other Devotions Than Those Glittering Devotions Of Lake Michigan”

Since you’re here … … we have a small favour to ask. More people are reading Side-Line Magazine than ever but advertising revenues across the media are falling fast. And unlike many news organisations, we haven’t put up a paywall – we want to keep our journalism as open as we can. So you can see why we need to ask for your help. Side-Line’s independent journalism takes a lot of time, money and hard work to produce. But we do it because we want to push the artists we like and who are equally fighting to survive. If everyone who reads our reporting, who likes it, helps fund it, our future would be much more secure. For as little as 5 US$, you can support Side-Line Magazine – and it only takes a minute. Thank you. The donations are safely powered by Paypal.
Tags: A Million Squeeks Will Do You No Harm