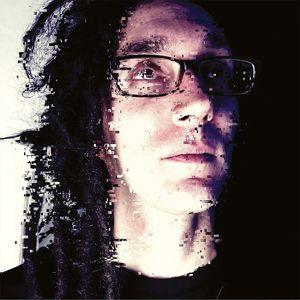 Content: “Falling Forward “is the first album in 9 years for Drumcorps. Master mind Aaron Spectre is a renowned and praised musician in the wider fields of experimental music who released different productions under different bands and monikers.

The sound of Drumcorps is a heavy fusion between multiple genres. The 14 cuts are mainly inspired by guitar and more especially by metal and hardcore ingredients. It’s not that of a coincidence if Drumcorps claims to be inspired by an artist like NIN, but the way he incorporated and worked out this influence into his sound is quite brutal. This sound has nothing really in common with the common metal standards. Aaron Spectre creates a kind of chaos; a sonic mayhem driven through a devilish cadence and orchestrated by manipulated and sampled guitar noises.

“Falling Forward” sounds close to a sonic assault made by a noise terrorist. Call it breakcore or simply hardcore, this work is a fusion between different music genres. Call it industrial-metal or grunge-noise it all remains merciless and covered by enraged screams dealing with dark and nihilistic themes.

Several guest musicians from bands like Converge (a band Aaron Spectre got involved with) and the singer of Animosity contributed to this work. The work moves into different ideas and one of the most surprising one probably emerges on the final cut “My Heart Files To Where You Are” on which the guitar parts are a little bit psychedelic like.

Conclusion: Drumcorps for sure is one of the most extreme sonic experiences from the Ad Noiseam roster. The sound is not the most accessible one although created by an artist who gained a serious reputation in his genre. Drumcorps is black or white, you will either like it or not! But one thing is for sure, it’s a devastating experience you’ll not soon forget.

Best songs: “Headstrong & Heartfoolish”, “Choose Again”, “My Heart Files To Where You Are”.