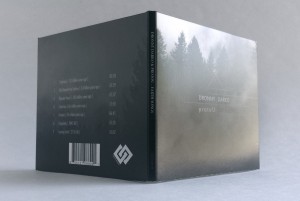 protoU has joined up with Cryo Chamber to release the intriguing “Earth Songs” album on which she collaborates with Dronny Darko. The dark ambient album holds dreamy atmospheric drones and field recordings on a concept album that starts with – and we quote the band – “the Big Bang, leading us through a path of evolution from the first life below the surface to the connected consciousness of humanity and us finally leaving earth.”

You can order the album on CD and as a HQ download right now from Cryo Chamber’s Bandcamp page.

protoU aka Sasha is a trained violinist and choir vocalist whose first ventures into own productions were a strong mix of distorted electronics followed by a multitude of related genres like drum n bass, ambient and electronic music. Dronny Darko from his side is an ambient driven, drone influenced artist from Kiev, Ukraine who debuted with the “Outer Tehom” release on Cryo Chamber.

Below is a video teaser for the “Earth Songs” album.

You can order the “Earth Songs” album below.

Since you’re here … … we have a small favour to ask. More people are reading Side-Line Magazine than ever but advertising revenues across the media are falling fast. And unlike many news organisations, we haven’t put up a paywall – we want to keep our journalism as open as we can. So you can see why we need to ask for your help. Side-Line’s independent journalism takes a lot of time, money and hard work to produce. But we do it because we want to push the artists we like and who are equally fighting to survive. If everyone who reads our reporting, who likes it, helps fund it, our future would be much more secure. For as little as 5 US$, you can support Side-Line Magazine – and it only takes a minute. Thank you. The donations are safely powered by Paypal.
Tags: Cryo Chamber, Dronny Darko, protoU