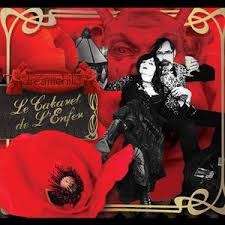 Content: The 5th full length album by Dreamchild is their first opus since “Sleeping Flowers Severed Scream Of Slaughter” (2008). This American band driven by Frank Gerace and Cheryl Wanner has been never quite prolific, releasing 5 albums in 17 years.

“Le Cabaret De L’Enfer” (“The Cabaret of Hell”) sounds like the title indicate. It’s a rather cabaret and theatrical inspired work on which the duo got some help from different guest musicians. The compositions have this strength to visualize the little stories performed by the theatrical vocal performance of Cheryl Wanner.

She sounds like she is exorcizing a lot of emotions in her singing while most of the songs reflect dark themes and figures (like Jack The Ripper) while other songs have been inspired by famous writers like Oscar Wilde and Emily Brontë.

I sometimes get the impression Dreamchild is taking us back to the late 19th Century, walking through dark streets reminding me of the work of Dickens. The name of the label (cf. Absinthe Records) totally fits with this strange and mysterious universe. It’s really magic to realize what the power of music can do with a listener. This album clearly sounds like it was conceived for a performance.

I also like the diversity of the work, which has been accomplished by the use of different instruments. The guitar (electric and acoustic) remains the main instrument, but you’ll also discover passages with keyboards, drums and percussion, bass, trumpet ao. The songs are alternating drama and a kind of childish approach, which comes through in the vocals as well. Some songs are into pure reverie while others are more into experimentalism. The common element between it all often appears to be a real fine taste for delicacy.

When listening to this work I simply got the impression of watching a movie. The work also reveals some little surprises like cover versions of Kate Bush and her mega-hit “Wuthering Heights” and Nico’s “Janitor Of Lunacy”. Both versions are not exactly my favorite cuts, but they have their place at the tracklist. There also is an interpretation of a Mexican folk song (cf. “La Llorona”), which has something flamenco-like.

My personal favorite song is the totally cabaret-devoted and intimate-like “Ophelia’s Melodious Lay”. It also sounds like one of the ultimate songs where the singer really plays with her great vocal skills. She also reminds me a bit of Björkk on “Femme Fatale”.

Conclusion: There’s a lot to experience on this album, which makes it fascinating and quite diverse. This is an album, which can really excel when joined by a strong visual performance like a ballet or a movie;