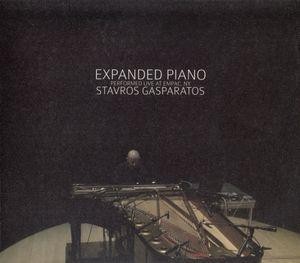 Content: Greek musician and performer Stavros Gasparatos remains one of the most experimental-minded artists of the Ad Noiseam roster. His newest opus only confirms the creativity and abstract vision of music this composer is dealing with.

“Expanded Piano” is a live recording that took place during a special performance of the artist in NY on November 27th 2014. The concept and especially recording techniques behind this recording is really special. ‘In this work, Stavros Gasparatos first extends the piano as an instrument beyond its accepted use: by hitting its wooden body, by hammering or caressing the strings, he creates uncommon sounds which are themselves digitally re-processed live.

The second part of this performance (and arguably the most difficult one to render on an album) consists in morphing the piano itself into the venue: 24 microphones were placed in the room, linked to as many loudspeakers, enabling the audience to experience the sounds as if sitting inside the piano’.

It’s the kind of sonic formula reminding me to early Staalplaat records, which featured the weirdest experimental concepts, but which were often idolized by experimental souls. The music is not always accessible for a wider audience, but it would be absolutely perfect when joined by a visual concept.

It doesn’t take away that some songs are more accessible and even revealing a kind of neo-classic impression, which is not that strange when the basis of the work is the piano. The opening composition is an efficient soundtrack-minded creation mainly played by low keys.

The experimental approach emerges at the next track like neo-classic music mixed with some industrial elements.

You sometimes get the impression that there are some field recordings running throughout the work while it all resulted from the play -in all imaginable formats, of the piano. “3C” is an absolute masterpiece in the genre, but I also have to mention the more cinematographic-like “The Orphan”. The low and somewhat monotonous creation has something intriguing, which in the end makes it simply irresistible.

The work even reveals a dreamy-like passage (cf. “M”), which is followed by a last cut (cf. “Scrape”), which is more into a mix of industrial- and experimental elements.

There’s an interesting picture inside the digipak, which gives you a better idea about the concept and recording techniques, which makes this record become true.

Conclusion: I’m not always fond of experimental music, but this work reflects the work of a creative mind and his transposition of experimentalism into an efficient abstract work.