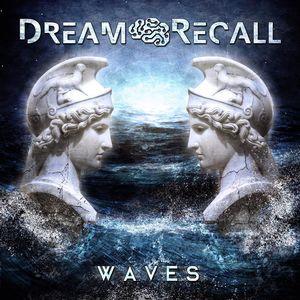 Content: We earlier this year discovered the debut-EP by Dream Recall, which is a new project of Gerry Hawkins. This Australian artist is progressively becoming a reference in the category of ‘young and talented musicians’. He’s involved in interesting bands like Avarice In Audio and Cryogenic Echelon.

The difference with Dream Recall is more into details and especially in the contribution of guest artists (and vocalists).

“Waves” takes off by 4 new songs. “Stockholm Syndrome” featuring Chris Anderson (Echo Grid) is stunning opener mixing a pumping cadence together with harsh, dark-electronics made by porcelain sounds plus enraged vocals. This song is a new dancefloor killer for sure!

The other songs reveal different ideas and that’s maybe one of the few reproaches I could make. Dream Recall moves from hard-pumping and furious electronics towards more dreamy compositions like “I Believe In Peace” featuring Jay Android (Ruinizer, Cease2xist) and “I Wish” featuring again Chris Anderson. It all remains pretty pop-inspired and dance-driven, but it’s quite different.

“Reasons To Die” featuring Damasius Venys (Mondträume) is another noticeable song, but again quite different. The vocals are quite clear and charismatic while the global production is more complex and overwhelming.

We next move back to the ‘hit’ of the previous EP “In Control”, which has been remixed by 2 great artists. C-Lekktor once more accomplished a real coup de force remixing the original song into a hard and merciless dark-electro style. The other remix has been made by Mind.Divided, which is not exactly a famous name, but with a real talent for intelligent remixes. This is an absolute masterpiece.

Last, but not least we get one more new song entitled “Now It’s Time” featuring Tracey Moth (Man Woman Machine, Antidote For Annie). I like this composition for the duality between the beautiful although somewhat cold female vocals at one side and rather rough kind of dance electro-pop at the other side.

Conclusion: I’m keeping a lookout to discover the debut full length by Dream Recall, which sounds like announcing a new sonic bomb in the most sophisticated and dance fields of electro-pop music.

Since you’re here … … we have a small favour to ask. More people are reading Side-Line Magazine than ever but advertising revenues across the media are falling fast. And unlike many news organisations, we haven’t put up a paywall – we want to keep our journalism as open as we can. So you can see why we need to ask for your help. Side-Line’s independent journalism takes a lot of time, money and hard work to produce. But we do it because we want to push the artists we like and who are equally fighting to survive. If everyone who reads our reporting, who likes it, helps fund it, our future would be much more secure. For as little as 5 US$, you can support Side-Line Magazine – and it only takes a minute. Thank you. The donations are safely powered by Paypal.
Tags: Dream Recall