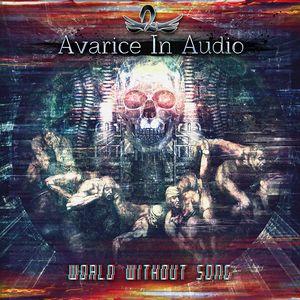 Content: Avarice In Audio is back on track with this new EP which serves as a teaser to their 2nd album announced for early 2016. The Australian duo driven by Jade Pegg and Gerry Hawkins took the world by surprise, releasing the successful debut album “Shine & Burn” in 2014. They’ve been joined now by Lawrie Bayldon (Studio-X) who’s contributing to the writing and the production.

The title-song “World Without Song” features Chris Anderson (ex-Dream Recall) and sounds like a pure clubby assault of dark-electronics mixed with technoid elements. The main strength of this song still appears to be its weakest point consisting of the somewhat to ‘dance’-minded orientation. It’s maybe a bit too dance-like for a dark-minded scene, but probably too dark for techno heads.

I don’t really care about the style because it’s a great and efficient club-track, which is well-crafted and revealing an excellent global production. There also is a great harmony –and duality as well, between the harsh male vocals and the somewhat robotic and sweeter female vocals. This contrast totally stands for the sound approach of Avarice In Audio.

“World Without Song” has been remixed by 5 artists. I have to make a special mention for the growing ‘master’ of dark-electronics and label mate Acylum. The original song has been transposed into a darker version, which at a point becomes tormenting like the original Acylum-sound.

There also is a hard and somewhat industrial-minded remix by Crowns Of Bone, which is a side-project of Rich Brookes (Ruinizer, Cease2xist). The other remixes left by Seraphim System, Axiom and Benjamin’s Plague are okay, but not exactly adding a real bonus to the song.

Last, but not least we also get an exclusive B-side song entitled “Last Judgement”. Avarice In Audio he moves a bit further into the exploration of technoid fields getting an irresistible kind of hard-trance track. This is an instrumental version, which again reveals great writing skills. This is not a cheap techno-song, but an intelligent and kicking elaborated piece.

Conclusion: This EP is a promising taster to announce the new opus by Avarice In Audio. The title-song is great, the B-side cut is ultra-danceable and as a bonus we also get a few cool remixes.