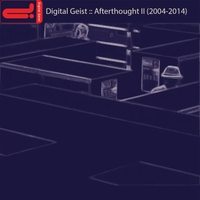 Background/Info: Alex Kourelis set up Digital Geist in the late 90s. He released a few noticeable productions and I especially remember him from the album “The Zero Engine” (2006). This American artist now strikes back with a kind of ‘anthology” unleashing 40 songs that were unreleased. The songs have been spread over 2 albums, the first one featuring 20 songs in between 1999 and 2003 while the other album covers 20 tracks composed between 2004 and 2014.

Content: The sound of Digital Geist is pure electronic, but definitely covering different genres. While we often notice EBM influences there also is a solid part of techno music running through the work. Some of the earliest cuts are pretty techno-minded and sometimes suffering from the weight of time.

But at the other side Alex K. clearly is a passionate sound maker. His work is sophisticated and elaborated with impressive sound treatments and intelligent arrangements. He explores much more fields than only EBM and techno. He’s also moving on electro-ambient paths, a few d’n’b influences and great dubby arrangements. The work can be now pretty astral-like and next into heavier bombasts. The cadence can be slow, but mainly driven by pumping dance kicks. The tech-trance inspiration is quite usual in the work of Digital Geist.

You can hear “Afterthought 2” sounds more fresh and worked out. The influences are globally speaking nearly the same although I also noticed acid treatments and groovy passages. All aspects of the production have been seriously improved and the period 2004 – 2014 clearly reveal several cool cuts.

Notice by the way that except the last song featuring vocals all of the songs remain instrumentals although featuring spoken samplings.

+ + + :  Digital Geist clearly sounds like one of the last hidden treasures of the underground electro scene. Kourelis is a talented composer and producer as well. His work reflects a great sound knowledge and composing skills. I was especially impressed by the global sound treatments this work has been made of. I personally prefer his work in between 2004 and 2014.

– – – : I’m not sure –even for an anthology, it was really essential to release a few ‘older’ cuts. The album features 40 songs, which is a bit over the top for an artist who remains rather unknown.

Conclusion: I really got some pleasure re-discovering this project, which I’m still convinced really deserves a wider recognition.