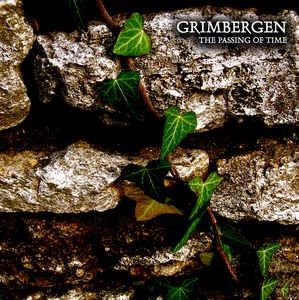 Background/Info: Grimbergen is a solo-project set up by Nathan Clemence. As indicated inside the gatefold-CD ‘Grimbergen is not dead…’. It indeed is now 7 years ago I first heard of Grimbergen (album “A Lonely Place”). Grimbergen, which is a well-known place for its beer in Belgian, has already been active for a longer period and wants to exorcize 7 years of frustration and disappointment, isolation and rejection, misery and despair by this new work.

Content: This work was mastered by Peter Andersson (Raison d’Être), which simply reveals the will of Clemence to strike back with a high qualitative production. I’m not saying that “The Passing Of Time” will become ‘the’ dark-ambient album of the year, but it clearly sounds fascinating and fully accomplished.

From analogue-like sweeps to dark bass and resonating, industrial drones, this work rapidly reveals an interesting potential. One of the main characteristics of dark-ambient music for sure is the visual strength of the music and Grimbergen clearly pushes the listener to face a monstrous world of darkness and total despair.

The multiple drones, overwhelming sound layers and other freaky noise treatments rapidly leave the listener in a state of torment. It is only accentuated by heavy thunder-like noises and dark industrial sounds.

Notice by the way that the last cut is a remix by Mandelbrot.

+ + + : Grimbergen hides a real potential and globally speaking this production features an interesting twist between pure dark-ambient atmospheres and tormenting industrial sounds. The tracks progressively build up giving you the impression of a dangerous sonic web from which you can’t escape.

– – – : Next to several real cool cuts, the album also reveals a few less convincing although pleasant tracks. This album is like a new start and that’s for sure not easy for an artist who’s already been busy for years now. I hope this album will get a proper promotion to get a deserved recognition.

Conclusion: Time goes by and often is a serious enemy for less prolific artists, but Grimbergen might be self-confident as this album has more than enough potential to catch the attention of dark-ambient freaks.