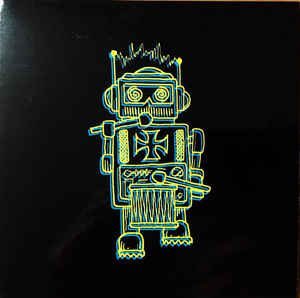 Background/Info: Albin Julius and his gang are back on track. The new album rather looks like an EP or mini-album only featuring 3 songs.

Content: they define their sound as ‘neu kraut musik’ (new ‘kraut’ music), but mainly deals with a psychedelic-rock composition. The songs also reveal a surprising, but exciting hypnotic feeling. I’m not saying that “Sucht & Ordnung” will lead you into a trance, but there’s a similar flavor hanging over the songs.

You’ll notice there’s only one song with vocals, which are pretty bewitching accentuating the hypnotic sensation.

+ + + : I like the psychedelic effect running through this composition. It’s not only about great guitar playing, but I also enjoy the kind of organ parts on the final track. It reminds me a bit of The Doors mixed with a darker approach. This work also has a strong visual appeal, which is created by the psychedelic atmosphere making the particularity of the work.

– – – : All titles are untitled so we don’t really get any indication about a deeper meaning. It’s not necessarily a bad thing as this way the listeners can create their own story. My main and only regret is that this work only features 3 songs.

Conclusion: Der Blutharsch And The Infinite Church Of The Leading Hand remains an enigmatic formation composing exciting songs although hard to grasp.

Tags: Der Blutharsch And The Infinite Church Of The Leading Hand