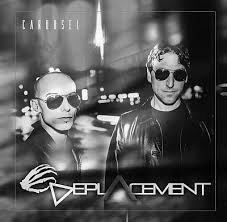 Content: Deplacement is an Italian electro-pop driven duo I recently discovered on a label compilation.

The band claims to be inspired by new-wave icons like The Sisters Of Mercy, The Cure, Joy Division, Bauhaus ao. It’s quite surprising to discover their music as electro-driven compositions empowered by guitar, but which has less in common with the aforementioned formations.

“Carousel” starts off with a gothic-wave and pop-inspired song called “Sadness And Solitude”. I instantly enjoyed the arrangements and the complementarily of the electronics and guitar. A similar song comes up next and mainly reveals the efficient melodic skills of Deplacement to compose carrying choruses. The music sounds sweet and well-crafted while reminding me now and then of Apoptygma Berzerk.

A few melancholic passages are running through their work as well while a few other cuts move into a delightful evasive style. “Carousel” features a rather diversified tracklist, which is cemented by accomplished melody lines. The production of the vocals is another fascinating element for the somewhat nasal timbre of voice, which is quite recognizable.

The only missing link is an absolute hit although I have to admit that “Frequency” is a song with a real potential. The cadence is a little bit faster and the clearly inspired 80s spirit comes through. This song sounds catchy and into melancholia. The last song “Voices” is another tip, but the evasive style does not have the power to make it on the dancefloor.

Conclusion: The “Carousel”-album simply confirms the potential I noticed at the Epictronic compilation on which this band was a real refreshing act. This is not exactly the kind of album that will set the electro-pop universe alight, but it definitely deserves a special mention for its global writing and production.