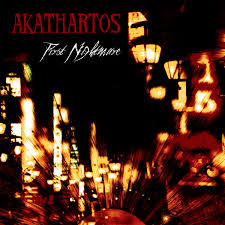 Content: Akathartos is a new Finnish solo-project dealing with a hard to define music genre. The band claims to be inspired by artists like Hans Zimmer, Suicide Commando, Wumpscut, Hocico and orchestral-, metal- and industrial ensembles.

This debut work features 6 songs taking off in a rather cinematographic style revealing epic- and symphonic arrangements plus some chants. It sounds like an intro and a promising debut.

The next song coming up is a bit weirder in sound. There’s a mix of dark-electro ingredients, which sound rather rough and under-produced, and symphonic passages. This is not exactly about duality, but simply two different songs running through each other.

The next few songs are suffering from a similar construction. The epic- and symphonic input is not bad at all while reinforced by male- and female chants. It sounds like an interesting cinematographic adventure, but the dark-electronics are hard to understand.

The last two songs reveal a similar approach and construction in sound, but Akathartos here seems to have found the formula to bring both influences together. I can’t say that it’s fully convincing, but a song like “Calling Of Dying” is somewhat encouraging for the future. This is a more successful osmosis between the drama and sorrow emerging from the epic passages on one side and the harder electronic layer on the other. “My Time Will Come” sounds a bit similar and we here even can speak about certain harmony between the different sources of inspiration.

Conclusion: Akathartos definitely tries to take the listener by surprise by mixing opposites with each other, but still has to find the right balance.

Since you’re here … … we have a small favour to ask. More people are reading Side-Line Magazine than ever but advertising revenues across the media are falling fast. And unlike many news organisations, we haven’t put up a paywall – we want to keep our journalism as open as we can. So you can see why we need to ask for your help. Side-Line’s independent journalism takes a lot of time, money and hard work to produce. But we do it because we want to push the artists we like and who are equally fighting to survive. If everyone who reads our reporting, who likes it, helps fund it, our future would be much more secure. For as little as 5 US$, you can support Side-Line Magazine – and it only takes a minute. Thank you. The donations are safely powered by Paypal.
Tags: Akathartos