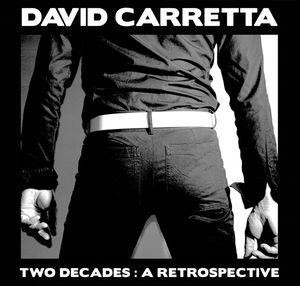 Background/Info: I think there are a few artists who need no real introduction. This French producer and artist is a pioneer from the so-called electroclash movement and got signed to the famous International Deejay Gigolo label while he later on set up his own label Space Factory.

I also remember him from his early involvement in the dark-EBM inspired formation Art Kinder Industrie. This compilation featuring 15 songs is a magic piece of music and as indicated in the title a marvelous ‘retrospective’.

Content: This is a fascinating compilation brings us back to some early tracks of the artist next to songs he did together with other bands like Workerpoor and The Hacker plus Millimetric. There also is a song he released under the Aerobic moniker, which was a project together with David’s wife Gigi Succes (who’s also running Space Factory as well).

“Two Decades” clearly brings the original electroclash sound back to live. It clearly remains a minimal experience in sound inspired by retro/vintage EBM and I here can evoke bands like The Neon Judgement, Kraftwerk and the raw style of the early Front 242 period.

The sound was also characterized by somewhat sterile and robotic vocals, but the main strength of the production remains the pure vintage and analogue-minded creation with a little raw, technoid flavor on top.

+ + + : This album is a nice selection of brilliant minimal body music, but what I especially appreciate in this artist is the unique sound-DNA, which is that typical when listening to David Carretta.

– – – : You can always wonder why some songs were not featured on it, but I regret there’s no song from Art Kinder Industrie on it (maybe remixed and/or reworked).

Conclusion: This ‘retrospective’ clearly sounds like an homage to the genius of this visionary artist who became one of the most influential musicians in his genre.