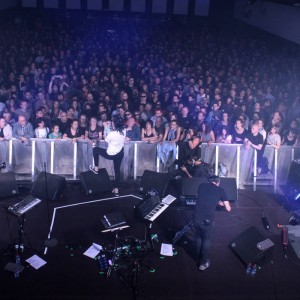 Background/Info: Soldout became a real hot electro-pop/electro-clash formation in Belgium, but the duo Charlotte Maison – David Baboulis is also reaching ground in other countries. After 4 full length albums and a soundtrack album they now release a free downloadable live album featuring 14 songs that were recorded during the summer of 2015 in Brussels.

Content: From the early success song “I Don’t Want To Have Sex With You”, to one of their latest hits “Wazabi”, to their cool cover version of “It’s A Sin” (featured at the soundtrack album “Pyppylove”), this work is an exciting opportunity to rediscover songs that were released over the last 10 years.

The sound formula of Soldout remains pretty simple and yet ultra efficient. There’s a perfect match between retro-electronics mainly inspired by synth-pop music and a refreshing technoid touch on top. From electroclash to indie-pop to simply cool electro-pop music this album also reveals Soldout as a great live band.

The songs have been empowered by extra live manipulations while I’m really impressed by Charlotte singing live. There where most singers lose some original power of stage, Charlotte Maison really rules, illustrating her vocal skills to her fans.

+ + + : I was a bit skeptical about this release, but it’s a real successful piece of work on, which you can hear a true live spirit running through the songs.

– – – : A few songs can’t totally convince me and I would have liked to hear a few more cuts instead (especially from their early period).

Conclusion: If you don’t’ know yet Soldout, just visit their site and Facebook page to get access to this free downloadable album. You’ll not be disappointed!