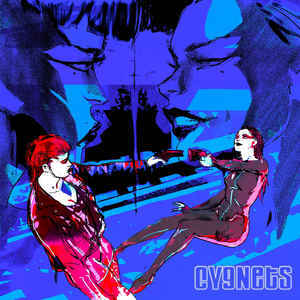 Background/Info: Cygnets is an American trio from Edmonton. After a few self-released albums they joined hands together with Negative Gain Productions releasing their official debut album “Sleepwalkers” in 2014. They now strike back with a new opus featuring 15 songs.

Content: “Alone/Together” sounds like a versatile composition. The album is moving in between electro-pop/new-wave songs on one side and a more rock-electro approach on the other. The pop-influenced songs are quite vintage sounding and might remind you of OMD on a few cuts while the somewhat feminine-like vocals vaguely evoke Chris Corner (IAMX).

The ‘rock’ driven songs are mainly carried by guitar although accomplished with electronic arrangements. It sometimes makes me think of Billy Idol going pop.

+ + + : Some of the vintage sound treatments are absolutely phenomenal and I especially refer to the great lead running throughout the opening song “A Dark Chapter In Our History”. The OMD fans will possibly be convinced by “Callie” while I also have to mention the noticeable final cut “Living In A Coma”. Cygnets also features a talented vocalist with a very personal timbre of voice.

– – – : Some of the ‘rock’-driven songs can’t really convince me. The main strength of this band definitely appears to be their retro-electro approach, which get a bit lost when it becomes more rock-minded. I would have preferred an album with fewer songs, but only the best ones.

Conclusion: This album is characterized by a few outstanding cuts, but unfortunately still features some forgettable tracks.