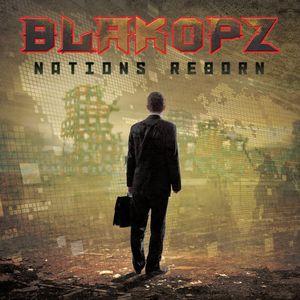 Content: “Nations Reborn” was simultaneously released with the re-issue of the “As Nations Decay”-album featuring an extra disc with an impressive load of remixes. The original album was released in 2013 and now gets a new boost with the extra remixes.

I’m not a big fan of albums filled with remixes, but “Nations Reborn” is the exception to the rule. I think it’s mainly due to the great original songs by BlakOPz and the fine selection of talented formations. The remixers all tried to inject a personal note to the original song, which resulted in a fascinating listening.

The concept of this release (set up by the label) also consists of remixing all of the original songs of the album. The only exception at “Nations Reborn” is the absence of 2 songs that were composed together with another band (Sleetgrout and Nitro/Noise).

But I also have to recommend the powerful astral vibes of the “#culturedelete”-remix by Cyferdyne. Another real smasher has been accomplished by Chainreactor, injecting a huge and irresistible ‘00ntz’ doses to “Turn Key Tyranny”.

Noisuf-X surprised me with a less powerful, yet intelligent electro-industrial remix of “Behind The Curtain”. “Business As Usual” has been remixed a rather enraged style by Cygnosic. Last, but not least I’ll end with the debut song of the album entitled “The Beginning”, which has been transformed by Sirus into a violent and somewhat hard-core version.

Ruinizer added their complex touch to “Thick As Thieves” while I globally expected a bit more out of the remixes by Alien Vampires and ESA”.

Conclusion: “Nations Reborn” stands for a rather ‘hard’ work featuring multiple great remixes, which are mainly dealing with EBM-related music. It might have been cool and really innovative to discover remixes by bands from totally different music genres, but that’s just my personal taste.

Since you’re here … … we have a small favour to ask. More people are reading Side-Line Magazine than ever but advertising revenues across the media are falling fast. And unlike many news organisations, we haven’t put up a paywall – we want to keep our journalism as open as we can. So you can see why we need to ask for your help. Side-Line’s independent journalism takes a lot of time, money and hard work to produce. But we do it because we want to push the artists we like and who are equally fighting to survive. If everyone who reads our reporting, who likes it, helps fund it, our future would be much more secure. For as little as 5 US$, you can support Side-Line Magazine – and it only takes a minute. Thank you. The donations are safely powered by Paypal.
Tags: BlakOPz