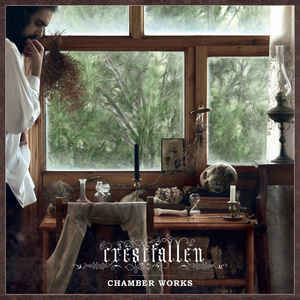 Background/Info: Crestfallen is a Greek project driven by the artistic spirit of Alexander Zafiropoulos. The album is meant as ‘a song cycle for intimate salons and small audiences’, which was the essence of ‘chamber music’. It took 8 years to achieve the work and debut album of Crestfallen.

Content: “Chamber Works” was written with an impressive arsenal of acoustic/classic instruments and joined by vocal parts revealing a classical (baritone) touch and other passages with a choir. It’s an amazing creation full of subtlelity and refinement. There also is a fascination for poetry, which totally fits to this kind of music.

Crestfallen illustrates the real artistic value of what music can be. The songs are filled with emotions, which most of the time seems to reflect melancholia and sadness. It has been accomplished with a total devotion to find the right place for each of the notes. The use of the instruments are often reinforcing the global feeling. It can be a piano arrangement or an accordion, the beauty of a cello and a violin, and acoustic guitar while I think to have also noticed the deeper bombast of a bassoon and an oboe.

The composition really is phenomenal and often reminds me of the unique sound approach of Sopor Aeternus and The Ensemble Of Shadows. It’s not as dark and depressed, but more melancholic and into dark reverie.

+ + + : Crestfallen realized a real ‘tour de force’. The use of acoustic instruments fascinates me for bringing emotions alive, but melancholia has been never that beautiful than when listening to this work.

– – – : Crestfallen doesn’t deal with the classical gothic standards and that’s maybe why it will not be that easy for this band to find a wider audience.

Conclusion: If I’d heard this album in time, before the end of 2015, it would have been for sure THE best album of 2015! “Chamber Works” fills the gap between utopia and perfection…