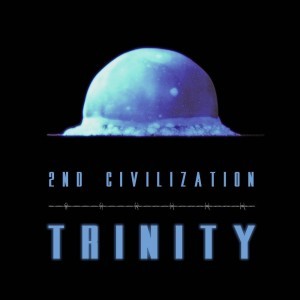 Background/Info: 2ND civilization is a Belgian band, which was originally started during the late 80s. The band split and came back to life more than 20 years later, releasing 2 full length albums on EK Product/Space Race Records.

“Trinity” is an interesting conceptual release featuring 4 tracks dealing with the atomic bombing in Hiroshima and Nagasaki.

Content: The lyrical concept is not that new, but has been successfully transposed into music. The robotic vocal effects are totally appropriated to the mix of EBM and electro-wave music. There’s an explicit 80s touch running through the songs, but it sounds cool. Some passages move into electro-rock while haunting atmospheres can be noticed as well.

“Trinity” became a fully accomplished piece of music revealing an interesting twist between its influences.

+ + + : Speaking for myself it’s my favorite 2ND Civilization release. I like the diversity, which remains inspired by the 80s. There’s a cool chorus running through “Radium Girl”. The lyrics are pretty clear and explicit, which reinforces the concept of the work.

– – – : “Trinity” is just missing some little details like more explicit melody lines and a little more of power to get a perfect result.

Conclusion: “Trinity” is a successful return from 2ND Civilization and I can only encourage them to move on this path.

Since you’re here … … we have a small favour to ask. More people are reading Side-Line Magazine than ever but advertising revenues across the media are falling fast. And unlike many news organisations, we haven’t put up a paywall – we want to keep our journalism as open as we can. So you can see why we need to ask for your help. Side-Line’s independent journalism takes a lot of time, money and hard work to produce. But we do it because we want to push the artists we like and who are equally fighting to survive. If everyone who reads our reporting, who likes it, helps fund it, our future would be much more secure. For as little as 5 US$, you can support Side-Line Magazine – and it only takes a minute. Thank you. The donations are safely powered by Paypal.
Tags: 2ND Civilization, EBM