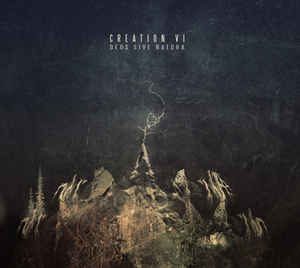 Background/Info: Cryo Chamber has signed an interesting formation from Ukraine. Tim Six aka Creation VI started his first experiments in 2006 and has released an impressive number of production on different, small and obscure companies. “Deus Sive Natura” is his debut work on Cryo Chamber and definitely an opportunity to reach a wider audience.

Content: “Deus Sive Natura” is mixing different styles and can be defined as the osmosis between dark-ambient, ritual and drones. It’s a diversified piece of work carried by dark sound resonations and awakening the curiosity by ritual chants and slow, tribal rhythms.

On top of the composition you’ll notice numerous field recordings, but the main particularity is the use of authentic/acoustic instruments like blockflute, Chinese flute (hulusi), shruti-box, harmonica, ocarina, kazoo, bells, chimes, seeds & seedpods. It injects an extra dimension to the work while creating a real complementary feeling together with the electronic manipulations.

+ + + : I can’t say that Creation VI sounds atypical, but Tim Six is bringing different- and related music genres together. But he also mixed different ways of composing by using electronics, field recordings and authentic instruments. The result is absolutely fascinating and efficient. It feels like every music genre and every single instrument are simply empowering the next one. “Deus Sive Natura” also is a work with a strong visual aspect accentuated by an overwhelming sound production.

– – – : There are only 5 cuts featured on this album so you can easily imagine Creation VI is the kind of project composing extra long duration pieces. The final track holds you in its grip for more than 23 minutes, but unfortunately it’s not exactly my favorite one.

Conclusion: Creation VI is a fascinating experience in sound, which has found the right label to reach the audience that will recognize and adore its sound.