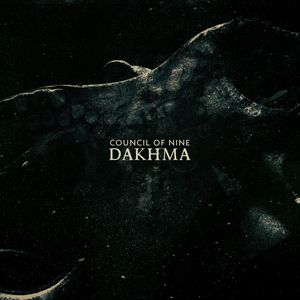 Content: I discovered Council Of Nine from the terrific “Tomb Of Empires”-CD featuring 4 different bands. I was impressed by the overwhelming, dark sound from this Californian based artist and so I was really wondering how the debut album would sound.

“Dakhma” features 6 pieces of extremely dark and elaborate music. The ambient element is absolutely impressive, but I also like the more refined electronic bleeps and -aspects, which give a real bonus to the work. The album takes off with the overwhelming “The Magi”, which holds you in its grip for more than 10 minutes. The dark structures have been empowered by a vibrating sound wave, which for sure will give you goose bumps.

“Tower Of Silence” continues on a similar way. I was impressed by the multiple sound effects and studio work emerging at the surface of this song. It’s a pure cellar-like atmosphere featuring icy blasts and echoing sounds. The next tracks reveal some extra humming sound waves and intriguing noises. The splendor of this work has to be found in the little details of whispering-like noises and other low vibrating sound waves. “Dakhma” is an album you have to experience with headphones as well so you can catch the multiple background noises and spooky blasts.

The album comes to its ultimate point with the great “Circle Of The Sun”, which brings all aforementioned ingredients to a sonic and ambient orgasm. The scary atmosphere emitting from this composition is mainly dominated by a terrific low humming sound wave. This final cut will embrace you by a cold and cutting icy sonic wind, which moves on for more than 14 minutes.

Conclusion: I can only say that the debut full length by Council Of Nine only confirms the first impression I had; this is a real talented new-comer in the dark-ambient style.