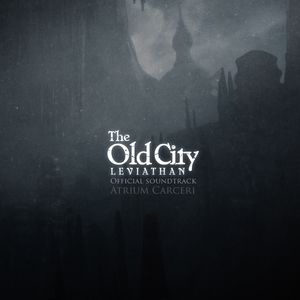 Content: Dark-ambient genius Simon Heath is an artist that caught my attention since his very first album (cf. “Cellblock”). Atrium Carceri became a renowned and successful dark-ambient project and has released an impressive number of productions.

I always wonder about the evolution of such a great artist after years of involvement and the least I can say is that this new work took me by surprise. “The Old City Of OST” also is a very particular work, which is a soundtrack that was composed for the Narrative Philosophical game “The Old City.” I can imagine it has been a real honor for Simon Heath to accomplish this conceptual work, which also reveals a different and, I even dare to say, unexplored side of the composer’s musical brain.

This album first of all sounds pretty soundtrack-like, which of course is quite logical because of the purpose, but it let us discover something new. The opening cut “Intro/Menu” sounds totally different from what I’ve previously heard. This song is more into a ‘chanson’ style while driven by a beautiful female voice. “Leviathan” coming up next sounds darker and into sadness. A sort of oppressive darkness hangs over this cut, which makes me think of a kind of ballet composition for skeletons. It however is a real fascinating piece of music!

We next dive into ultra dark sound realms leading the listener to explore the darkest corners of his poor brain. It all sounds desperate and nihilistic, but still very visual-like. From the sound reminding me of a music box to ghost-like atmospheres, the work becomes more and more oppressive.

“Worship” is an absolute masterpiece. This composition is characterized by an impressive progression featuring metallic sound treatments, sharp noises and a kind of humming chants. All the elements together create a rather ritual atmosphere where the listener (or player) will have to face his own demons…

“Old Tunnels” is another brilliant cut with an extra freaky touch. Like most of the tracks this work was accomplished by poignant sound layers. All the cuts are not that dark, but it of course remains the main ‘menu’ of this release. A few tracks are more into some prosperity and I here want to tip the cool “Journey Home.”

I also like the more refined “Childhood II”. We here get back to darker realms empowered by some Latin chants and a real delicacy in the arrangements. And if you really have some doubts about the soundtrack format of this work I can recommend “Them”, which is one more of an evasive cut leading you through sadness. I like the kind of neo-classic touch running through this song.

Conclusion: “The Old City OST” is a surprising release, which is for sure the most diversified work by Atrium Carceri. It all sounds like it incited the artist to explore some unexplored paths and the least I can say is that it resulted in an enlightening experience.