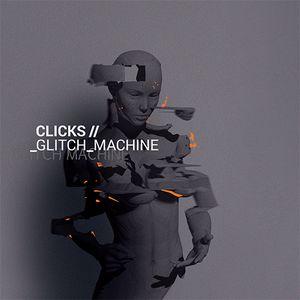 Background/Info: Lukasz (drums), Tomek (machines) and front man Kr-Lik (vocals, programming) are 3 Polish musicians who know each other from their involvement in Controlled Collapse. This band released its debut album “Injection” (2007) on Dependent Records. The trio strikes back under a new moniker revealing a different sound as well. The debut work took 3 years to achieve.

Content: I have the conviction that Clicks will rapidly become one of the hottest new-coming bands of 2016. They don’t really reinvent electronics, but they bring a refreshing minimal electro format, which can be defined as the offspring of electroclash and minimal-EBM.

The production reflects an astonishing maturity and total efficiency. I got the impression of hearing one hit after the other. “Glitch_Machine” doesn’t only reveal multiple outstanding dance cuts, but the global sound production is absolutely amazing as well. You can hear that this work has been patiently constructed. The sound treatments carried by flat bass lines, aggreppo sequences and retro-like drums are just genius. The vocal production is another fascinating aspect as Kr-Lik moves from enraged passages towards robotic manipulated vocals while his ‘normal’ timbre of voice will maybe remind you of Faderhead.

Clicks clearly evokes good-old vintage electronics, which have been joined by refreshing elements. The band is not reinventing electroclash and EBM, but they simply found a successful formula to inject a refreshing breeze to old standards.

+ + + : The global production is outstanding and close to perfection. There are not many albums featuring that many potential hit.

– – – : When an album comes that close to perfection it simply is impossible to find minus points, but it’s clear that this is not the kind of work that will appeal for dark-electro fanatics.

Conclusion: If you think that Benny Benassi was music for your little sister, you now will be pleased to hear that there’s something tougher and more underground-minded for you! “Glitch_Machine” is without a shadow of a doubt one of the albums that will enter into the history of 2016 and got some chances maybe to become THE album of the year!