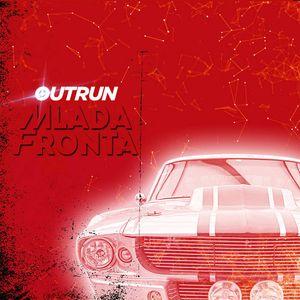 Background/Info: French producer Remy Pelleschi is a veteran of the electronic & industrial scene. He released an impressive number of productions on different labels, but he also went through different period and influences.

It all started pretty EBM-like and progressively evolved into a harder and phenomenal tribal-industrial format. The past few years seem to be the start of a new age.

Content: “Outrun” features 11 cuts, which from start on reveal the impressive technical skills of Pelleschi as producer. He has this patience and knowledge to create blasting sounds, but he mixed them an extremely powerful way. When listening to Mlada Fronta you’ll notice the enormous ‘volume’ of the work and that’s exactly what comes through at “Outrun”.

The influences have been considerably changed. The tribal aspect of the work has been replaced by a heavy space-techno orientated sound, which has been mixed with a dark and somewhat industrial format. Mlada Fronta seems to prove that techno music can be still sophisticated and intelligent.

Some parts of the work have been joined by vague cinematographic elements, which bring a more relaxing touch to the work. The track remain however driven by deep, resonating bass sounds and numerous astral atmospheres carried by a danceable cadence.

+ + + : Mlada Fronta definitely is a band in progress. The new style was already noticeable at the past few releases, but is reaching its zenith at “Outrun”. Remy Pelleschi once more illustrates his genius as sound alchemist and producer.

– – – : If you’re a bit nostalgic you for sure will miss the furious tribal-industrial element of his early work. I can imagine some fans will find this new work a bit too techno-minded.

Conclusion: Mlada Fronta seems to reveal a new and maybe further vision of techno music, which has been simply industrialized and accomplished a more complex way. This album is a high-tech production!