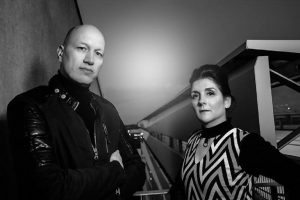 The ninth full length album of X Marks The Pedwalk is for sure a special one. Mastermind Sevren Ni-Arb (aka André Schmechta) somewhere considers this new work as his most accomplished opus ever, but it also is the first album of his main band released on his own label Meshwork Music. Enough reasons to get in touch with this veteran and master of electronics.

Q: “Secrets” is the ninth X Marks The Pedwalk-album in history, but I guess it’s a real special one as it also is the first one released on your own brand-new label Meshwork Music. How does that feel?

SEVREN NI-ARB: I´m really very happy! We spent so much time and energy in the production of “Secrets” – music, artwork, videos, promotion, distribution – and it´s a great feeling to see this album growing every day. From my point of view it´s the most mature and professional release of X MARKS THE PEDWALK in any aspect so far. We got first awesome feedback by fans and media and so I´m confident that “Secrets” will be also a very successful Meshwork Music release.

Q: I guess it’s not a coincidence if the ninth album also features nine songs! I found an interesting symbolic about the number 9 referring to the number of months a woman needs to bear a child. How did the conception (fertilization) and pregnancy of “Secrets” happened?

SEVREN NI-ARB: This is an interesting aspect. But no, there were no ideas like that. I´ve started first with compositions and sound designs in Autumn 2015. From the very beginning I wanted to produce a compact and emotional album with a maximum of 10 tracks. When the first rough productions of the 9 tracks – you now can find on “Secrets”- were completed, I felt and knew that these 9 tracks are “Secrets” – no more, no less! So in the final production phase I just focused on these tracks.

Q: “Secrets” is inspired by all little ‘secrets’ we have and hide. How did you get interested in this subject and what did you try to express in the lyrical content?

SEVREN NI-ARB: The album title was in my mind before I started music production. I like to dive deeper into any aspects of our mind. The new album is not just about little secrets, but also very essential and fundamental themes. We are affected by emotions, people and occurrences that change our minds. Some secrets are growing over years and prevent people to live a free life for a long time or maybe forever. They change relationships and reality around us. All these secrets are a part of us and form us to the human being we are –in any aspect of life.

Q: Sound-wise “Secrets” sounds like moving on where the previous albums stopped; a kind of electro-reverie, somewhere in between ambient, pop and more danceable rhythms, but still a more intimate work. What is it all about and what kind of album did you want to achieve?

SEVREN NI-ARB: Well, “Secrets” is again an intimate work and can be seen as a part of the mosaic we started to create with our comeback album “Inner Zone Journey” in 2009. But talking about sound I think “Secrets” is different to the previous albums “The House Of Rain“ and “The Sun, The Cold And My Underwater Fear“.

I have a bunch of software in my studio, creative tools with unlimited possibilities. But more than on the albums mentioned before I used analog hardware synthesizers. I bought a lot of new gear during the last months. It´s a more direct and physical way to create sounds. The main idea was to have a strong and concisely sound design on the new album, a sound design that is anchored in the past of electronic music and seems to trace the fragile emotions of “SECRETS” to its origin.

I also wanted to push the vocal side to give it more space for telling all the stories and secrets. But sure on “Secrets“ you can also find the eclectic, unique and modern atmosphere with multi-layered sounds and FX that is known from other releases of X MARKS THE PEDWALK.

Q: “Secrets” also is the first album on, which Estefania got that much importance. She in a way became the main singer on “Secrets”. This is an interesting move so how did it happened and what’s her real impact in X Marks The Pedwalk?

SEVREN NI-ARB: Yes, it is a kind of organic evolution and it feels stronger than ever before! We both have different sounding voices –but even they are different, they also work perfectly together in one song. So it is a kind of luxury for me as the composer to choose the right voice for certain tracks.

Estefanía has an outstanding voice that fits perfect to the electronic music worlds of X MARKS THE PEDWALK. Songs like “Masterpiece”, “Breathe” or “Ghost” all show the amazing emotional range of her voice. Together we work very close on the vocal side. Sometimes there is a complete vocal arrangement and melody done by me and Estefanía is just tuning the details during the vocal recording, sometimes there are just some phrases or hooks and we both get into vocal sessions with improvisation and experimentation to find the perfect vocal lines for a song together. And we also discuss the vocal part during the final production and mastering until we both are satisfied with the results.

Q: I think it’s really interesting to see what happened and changed in between the first album “Freaks” (1991) and “Secrets” (2017). How much of the “Freaks”-album do you find back in “Secrets”?

SEVREN NI-ARB: It´s a long time ago that I got a serious listen to “Freaks”, so finally it is not easy to find a real connection. Both albums mark a different and special snapshot of X Marks The Pedwalk. “Freaks” was our very first album and it is young, wild and a little bit naive work, but still a kind of icon in our history.

“Secrets” as said before is more mature with a complete different background of life. So I think, both albums are completely different in every aspect, but have a common origin –my life and my creativity.

Since you’re here … … we have a small favour to ask. More people are reading Side-Line Magazine than ever but advertising revenues across the media are falling fast. And unlike many news organisations, we haven’t put up a paywall – we want to keep our journalism as open as we can. So you can see why we need to ask for your help. Side-Line’s independent journalism takes a lot of time, money and hard work to produce. But we do it because we want to push the artists we like and who are equally fighting to survive. If everyone who reads our reporting, who likes it, helps fund it, our future would be much more secure. For as little as 5 US$, you can support Side-Line Magazine – and it only takes a minute. Thank you. The donations are safely powered by Paypal.
Tags: X Marks The Pedwalk