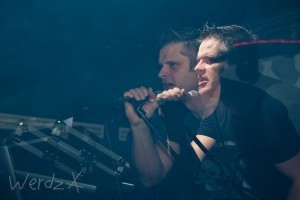 Behind The Opposer Divine (T.O.D.) is hiding Boris Mutina (Minor). He also is a live member of Terminal State, which is the project of his brother. T.O.D. started releasing a few digital productions at the Netlabel AmaCreedO Records “11” while he next got signed at Aliens Production. This Slovakian label has a nose for intelligent electronic formations dealing with IDM, minimal electronics and related genres. The last year released opus “Barb Wire Around Your Neck” took me by surprise revealing a fine and well-crafted electronic composition. The new album “Reverse//Human” sounds maybe less complex, but still driven by the passion for beautiful atmospheres and creative sound sculptures. Now a bit more details about this great piece of music.

Q: What incited you to set up T.O.D. and what kind of sound did you’ve in mind?

Minor: At the start The Opposer Divine was intended to be an ambient or IDM or even experimental sound project, just for fun, but later on I realized it would be better limiting the project into some ‘sort of borders kill the creation’. So, there’s lot of freedom and it’s still fun. And when I am reading the review saying ‘the sound is like…’ I say ‘really?’ I do not want to copy anyone, but yes, I got inspiration from this scene. I actually do listen almost everything listenable except the mainstream which I avoid because it’s not creative at all.

Q: But your music clearly reveals a real fascination and passion for sound research and creation. Tell us a bit more about your way of working and the sound creation?

Minor: Thanks for the compliment. It’s about feeling the sound as a single sound and as a result when joined with another sound. As most of musicians dealing with electronic music I am also surrounded by tons of sound banks and samples, but I try to reconstruct what I hear, tweak it, whatever… and when I am half the way round sometimes it happens that I like the result even more than what I am trying to achieve. For example, I am trying to explore the sound after the attack phase, the decay sometimes brings so many unexpected surprises. But you can hit the keys and turn the knobs and the result will be nothing.

Songs also come alive through my personal state of mind and I will not forget to mention Peter from Aliens Production (my label). When I delivered the new material, he said: ‘man, do something with this sound’. So, cheers mate and thanks.

Q: How do you analyze your own evolution as musician from your early beginning towards the “Reverse/Human”-album?

Minor: I got a real good response and critic on the previous album and I immediately got an invitation to play on ‘Dark EBM Souls’-festival in Bratislava. I was like ‘huh what should I play?.’ Of course I’ve had already something half done but I wasn’t satisfied with it. I decided to move forward and put even more emotions in my music. I created compositions with rhythms while holding on ambient structures. The first song with this element in mind was “Deceit Of The Saints” which by the way is not very danceable. Some consider it as a very heavy IDM/ambient structure, a mind-killing thing. I am very proud about this one.

“Reverse//Human” turned out to be a good opportunity while I know there’re still unexplored areas. And I’ve created the compositions which could be played also live.

Q: I think you’re already working on new material so what are the sources of inspiration and sound direction for the further production(s)?

Minor: There’s a remix album in my hard drive, which needs to get completed, but you’re right, I am already working on “Changing Into The Wasteland”. It will not be released before the end of this year, maybe even later. I am taking my time to find the good direction for this one. You can already hear the song called “Earth Divided” on “Hypotaxia”-sampler by Aliens Production.

For me, it has a typical T.O.D. trademark featuring the touch of the old days.  But I can already tell you know that “Changing Into The Wasteland” will be much more different from what you have heard on previous releases. Regarding the inspiration, it’s life in all its forms and happenings. There’s also a lot of music, I mean, good music which is inspiring me. The main tool is to get a never ending inspiration. I’ve recently met the guys from La Santé at ‘Front Fabrik’-Festival in Krakow and found their music very inspiring in the quality of the sound.

Q: You’re still working with your brother in Terminal State, so how does it feel working together as brothers and what are the main (musical) differences between you and him?

Minor: He is my brother and a part of my inspiration. What else should I say? I thank him, because he pushed me into having fun with T.O.D. You can hear it’s different from Terminal State and not only because the flow of our work is that much different. The rhythms and composition of Terminal state both are more complex, but it does not go that far into ambient waters. I remember the days when he decided to continue with Terminal State on his own. After “Unline Codes” came the “Strange Horizons”-album, which I’m still considering as a masterpiece. This album is my brothers signature, the way he deals with music. There is no compromise, but just perfection. Working with him is always a pleasure and I look forward to the next jam session. Hopefully soon.