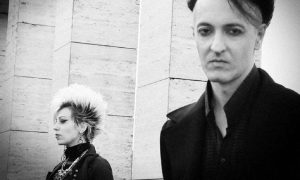 ‘Froxeanne’ and Diego Merletto are involved with The Frozen Autumn since 1996 although the band was set up in 1993. They became one of the most famous and internationally recognized new-wave/gothic formation from Italy. They define their sound as ‘frozen wave’ and has recently unleashed their newest opus “The Fellow Traveller” on Echozone (for Europe) and Metropolis (for the US). The new work is a well-crafted composition carried by melancholic atmospheres and poppy melody lines. I’d a chat with the band.

Q: The Frozen Autumn is not exactly releasing new albums on a regular basis so how do you feel about the new work “The Fellow Traveller” and what kind of album is it all about?

The Frozen Autumn: Well, it depends on what you mean by saying ‘at a regular basis’; if that means every year, well no, we don’t. We’ve never stopped making music with The Frozen Autumn since 1993, but we don’t feel the urge to follow a release-schedule shaped on a mainstream model for which musicians should issue something as frequently as possible just to please the market, even if, artistically speaking, they have nothing new to say, or they are not ready to say it.

Moreover, nowadays in our scene, new and old bands sometimes get glorified (rightly or wrongly) after having released just a couple of 45 inches vinyls altogether, so the concept of releasing albums on a regular basis, if not releasing albums tout-court, now has just a very relative meaning, especially when defining an alternative artist’s activity and value.

We absolutely love “The Fellow Traveller”, needless to say. What kind of album is it? The kind of album you spend years to work on, so that no detail gets neglected.

Q: Your music has been always characterized by melancholia although your sound remains hard to define. It all feels like the emotional content is much more important that the music style! How does it feel for you and what are the main themes running through “The Fellow Traveller”?

The Frozen Autumn: We’re original, that’s for sure. We’ve worked hard and we were able to develop our own style through the years, so that our sound is totally recognizable, though versatile so that’s why you cannot really label it. We love to call it ‘frozen wave’ btw, so feel free to use that term too. We don’t know whether the emotional content takes over the music, we just know that we do what we like to do, the way we know best, with honesty. The main theme is the ‘travel’: in space, in time, through non-lieux, through dimensions, through life, through galaxies, in dreams, a metaphysical travel too. And having worked and toured together for more than 2 decades now, we can well define ourselves ‘fellow travellers’.

Q: It took you a few years to write and accomplish this new album. What have been the main difficulties you encountered during the entire process?

The Frozen Autumn: Rome wasn’t built in a day. We released the EP “Lie In Wait” in December 2014 and we finished “The Fellow Traveller” at the end of 2016. Then we had to prepare the graphics and technical details and finally the release was delayed to November 2017 to be worldwide synchronized, since we licensed it to 2 labels, Echozone/Soulfood and Metropolis Records. We personally don’t think 2 years is a huge period to come up with a 60 min running time of good songs and sounds. There are both artistic and technical times, that can hardly be skipped if you want to do things properly.

Q: What happened with Calembour Records, which was your own label? What have been your experiences as ‘label’ and did it change your vision upon the music scene & business?

The Frozen Autumn: Calembour Records is in stand-by because of lack of time. The trademark still exists and so does the website etc. etc., however, so we can’t exclude to release something in the future. It surely helped us getting a better insight about what happens behind the scenes and it was a very enriching experience from the human point of view.

Q: You’re working together since 1993 so what makes the chemistry between both of you and do you notice some changes and/or evolution in the song writing and global production process?

The Frozen Autumn: The band exists since 1993, but we’ve been working together since 1996 ‘only’. The chemistry between us is due to a profound mutual knowledge and much in common as for the music taste. We’re tied by the great passion for experimenting with synthesizers and for new-wave music, among other topics. We’ve evolved together artistically and we are each others’ best friends… What else can we say? We’ve been lucky in this sense, and we feel grateful for that.

Q: What will be the next step and further plans for The Frozen Autumn and how do you see yourself evolving as musicians?

The Frozen Autumn: Good question. Keeping on experimenting on sounds and keeping on working together, depicting new acoustic landscapes. Maybe focusing more on the work in studio, rather than on the live activity. We’ve got many ideas on our minds, that are just waiting for us to give them the right music shape. And that’s what we’ll try to do.

Since you’re here … … we have a small favour to ask. More people are reading Side-Line Magazine than ever but advertising revenues across the media are falling fast. And unlike many news organisations, we haven’t put up a paywall – we want to keep our journalism as open as we can. So you can see why we need to ask for your help. Side-Line’s independent journalism takes a lot of time, money and hard work to produce. But we do it because we want to push the artists we like and who are equally fighting to survive. If everyone who reads our reporting, who likes it, helps fund it, our future would be much more secure. For as little as 5 US$, you can support Side-Line Magazine – and it only takes a minute. Thank you. The donations are safely powered by Paypal.
Tags: The Frozen Autumn