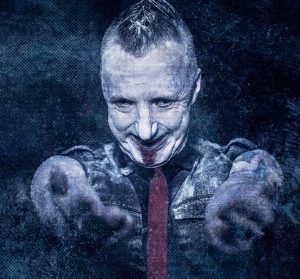 Four years have passed since the previous Suicide Commando-album (cf. “When Evil Speaks”). Johan Van Roy had to struggle with a burn out, but he finally found the energy to beat his inner demons. This experience inspired him to compose one of his darkest and maybe most ‘atypical’ albums to date entitled “Forest Of The impaled” (released on Out Of Line). Suicide Commando remains one of the leading ships of dark-electronic music and I’d a chat with the captain on board.

Q: I think to have understood that “Forest Of The Impaled” probably is one of your most intimate releases to date, right? What is it all about and is there any particular meaning/symbolic behind the title?

Johan: Yes, it definitely became my most intimate and personal release to date. “Forest Of The Impaled” turned out to be my own private therapy to fight my fears and monsters which I had to conquer in the last 2 years.

There’s a lot more emotion and feelings in this new album then in my previous works. Maybe not because of the vocals, but surely because of the dark music and atmosphere. In fact there’s no real meaning behind the title, I just thought it fitted the cold and apocalyptic atmosphere I wanted to create pretty well.

Q: I remember one of your songs “Death Cures All Pain”, but don’t you think music can cures all pain as well?

Johan: Oh sure music can cure pain, actually I’m a perfect example of that. Music helped me to overcome my burn out, “Forest Of The Impaled” is the result of that. Half of the tracks on the album were already written 2 years ago before my burn out, the rest was written in the last few months and for me was the perfect therapy to fight my inner monsters. That’s why “Forest Of The Impaled” isn’t a happy album and probably my darkest album ever.

Q: “Crack Up”, “Death Lies Waiting” and “Chasm Of Emptiness” are quite refreshing songs; it feels a bit like you’ve reinvented the Suicide Commando sound by adding subtle treatments and ‘new’ influences. Are you aware of this evolution and did you’d a particular sound in mind when starting the writing?

Johan: I never really start with a plan. These things have to come spontaneously, you (well, at least I can’t !) can’t write something on command, it wouldn’t work for me. The only thing that in some way was done deliberately, was the plan to have more slower songs on the new album. Either I’m getting too old, or call me stubborn, but I really wanted to go into the opposite direction of all those copycats of today. In times where each song has to be over 120 bpm I only have 3 songs this time going over the 120 bpm.

Q: How did you convince Jean-Luc Demeyer to sing on the already familiar, but still surprising “The Pain That You Like”? How did the writing and recording of this song happened?

Johan: I’ve known Jean-Luc for many years now, but only got to know him better in the last 3 or 4 years. Since I’ve always been a big fan of his works for Front 242, I thought it would be a good idea to ask him to do some guest vocals. So when I was writing “The Pain That You Like” I thought that song might fit his voice pretty well, so I just asked and to my surprise he immediately agreed on doing so. After having Dirk Ivens who did guest vocals on my very first album back in 1994, I now finally could have one of my other heroes do guest vocals on a Suicide Commando song. So now I can die in peace… (laugh).

Q: “Forest Of The Impaled” will be released in different formats. What does the vinyl format means to you ano 2017 and what are your impressions about all the Suicide Commando songs that have been covered by other artists for the ‘fan-box’ edition?

Johan: I grew up with vinyl in the eighties, so for me it’s more of a nostalgia thing to have the new album on vinyl as well. It sure ain’t something to get rich with, but I’m really glad Out Of Line wanted to do a vinyl edition as well.

I’m really happy how the ‘tribute’-album turned out. It wasn’t an easy decision to pick the best covers as I received so many covers, but I think in the end it has the best mix of old and newer songs covered by bands that in some way or another have been influenced by Suicide Commando.

Q: I can easily imagine, Suicide Commando has changed your life. What’s the real impact of getting recognized and famous on the ‘person’ hiding behind the ‘artist’ and do you sometimes think what will come after Suicide Commando?

Johan: Sure it has changed my life in different ways. I was and still am able to live from and thanks to my music, with the goodwill of the company where I work to allow me to keep on working half time and spend the other half on my music. My music brought me to places all over the world where I otherwise never ever would have been able to go to. My music brought me satisfaction, friendships…

But sadly enough it also had a downside, the never ending work and stress, the killing combination of work + music + family got me into this burn out. Being recognized didn’t have much impact on my life, especially since this scene is so small in Belgium, I can still walk around on the streets without getting recognized… (laugh).

When you’re getting older you obviously start to think about things like what will come after Suicide Commando… When I started making music back in 1986 I never imagined I still would be doing this after 30 years, but I’m still doing music with the same old passion and love for this kind of electronic music. I guess that’s the main reason why I still do this music, my eternal love and passion for this kind of cold electronic music.

I have no idea how long I will continue, but I can easily imagine I’ll do this until death do us part…