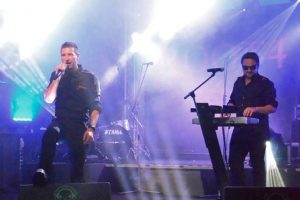 Root4 is not exactly the most famous and renowned underground electro band. Set up in 1990 the German formation went through several line-up changes releasing new work at irregular basis. Their newest opus “Walk My Way” already got very positive response and I can only confirm it’s a great and powerful piece of electro-pop music. The songs are well-crafted and elaborated while the global production sounds ultra-professional. I had a chat with founding member and creative spirit of the band Hauke Hein.

Q: I noticed ROOT4 was set up in the late 90s. How did you came in touch with electronic music and what kind of band did you had in mind?

Hauke: In 1990 I found ROOT4 with a good friend. We both loved electronic music like Depeche Mode and Front 242. Gunter played piano in the studio and I was the singer. After many years, the cast changed and new members joined in. We started with synth-pop, changed in 2008 to future-pop and our new album is said to be dark electro.

Q: The band went through several line-up changes, which might explain ROOT4 releases new material at irregular basis. How do you look back to the past years and releases and what have been the main facts?

Hauke: Making music is a pure hobby. Everyone has a real job and not always enough time for making new songs. Since 2013 we worked on new songs, which also means, spending a lot of money on the production. In addition to the song writing many people are involved. And that takes time. Last year in September I went to my good music friend Chris and he produced, mixed and mastered the ten new songs and one acoustic version for the album.

Q: “Walk My Way” album must be a kind of new start, but still a mature and well-crafted production! What did you keep in mind from the writing/production process and what is the album all about?

Hauke: Chris and I spent so many weeks and months in his recording studio – from September to January. It is not easy to say ‘this track is finished’. Because every day again you listen to your song and you constantly get new ideas of melodies that you want to pack into the song. But you know you have to finish one song before starting another one. Otherwise you will never finish! The lyrics are very different from song to song. One is about the current topic refugees, from the perspective of a refugee. One song (“Follow Me”) tells the story of people blindly following other leaders. And “Strassen” is a cover of a song from ACSII DISKO. I loved the original so much that I just had to cover it.

Q: “Walk My Way” clearly sounds inspired by electro-pop, but you also like hard-pumping kicks and guitar play. You this way created a more personal- and somewhat ‘free-styled pop’ sound. What’s your own perception about the ‘sound’?

Hauke: We wanted to produce not only an album for the dark scene, but also for people who like to hear pop. It shall be a bridge between these ‘groups’.

I loved to have guitar sounds in the songs, but not too much… When my friend Art assisted to the recording sessions we had so much fun together and we decided to put some of his Ideas on the album. To get the guitar sounds live on stage we played a few shows with Art, Chris and me. This was great!!

Q: I think you already released three singles, which are taken from the new album. How comes and what’s the real impact of releasing singles today?

Hauke: I am a honest person; we could not decide which song could be the best one to release as a single. At the end we chose for the pop song “Follow Me”, the electro song “Drugs Are My Master” and the dance song “Strassen”. The next thing is, when you release only the album you get only the attention once. When you release two or three singles, the album has a bigger chance to be heard.

Q: You already did a few tours as support act for great names such as Combichrist, De/Vision and now Decoded Feedback. We all know bands often have to pay to get on tour with bigger names. What’s your personal experience about this item and what kind of live band are you?

Hauke: In recent years I noticed that fewer people come to the concerts. Many people are only waiting for the big festivals and less are visiting single band-shows. If more audience would come, better fees would be possible for the bands… (laugh).

When you are on tour for many days with another band like Decoded Feedback you always have so much fun together. It’s like going on holidays with friends. And in the evening you play a show and meet many cool people. That’s what makes the tour an experience. Our booking management always tries to make a free tour possible. If you have enough audience, everything is payed while somewhere else you only get money from selling merchandising and CD’s, but having fun is the most important thing!

ROOT4 loves to play live and give the audience a cool party! We play many parts of the songs live with the Akai MPC5000. This gives us the opportunity to customize the show and make them a bit different every time.