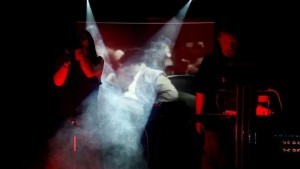 Red Lokust is a new dark-electronic formation featuring Distortion Productions owner Jim Semonik who’s also known from Rein[Forced] and the instigator behind the “Electronic Saviors”-concept and Lee Lauer who got some fame as member of Aslan Faction and later on Killing Ophelia. A few months ago now the duo released their debut-album “The Repercussions Of Shedding Your Skin” on Jim’s label. This work reveals 10 tracks plus remixes by Leather Strip and Interface. Enough reasons to hook up with both musicians.

Q: You guys both have been already involved in numerous bands so why did you feel the need to set up a new project and what makes Red Lokust different from earlier experiences?

Jim: I have always been a fan of what Lee has done with Aslan Faction and Killing Ophelia. So when he approached me at a Rein[Forced] gig about starting a project, I jumped at the chance. I instinctively knew that my chemistry with Lee would be very different than anything I’d ever done before. Luckily I was right because it was indeed very good chemistry and partnership.

Lee: Jim is seriously easy going to work with and I’m impressed with his ability to write lyrics under pressure.

Q: How did the writing and recording of the album happened and are there some specific experiences you’ll keep in mind?

Jim: Lots of emailing and uploading. Lee would bounce tracks my way just to see what I could do with them. Initially he gave me 6 tracks to work with. I remember listening to them in an airport for the first time and being blown away. I recorded my vox here in Pittsburgh at a studio. However, when it came time to mix, I traveled out to Lee’s place and we were on studio lockdown and we plowed through each track. I have fond memories of that weekend. I’ve never had such a productive time. But Lee’s cat bites.

Lee: This was the first time I’ve done a project remotely like this and was a little apprehensive doing it that way but it worked out perfectly. Jim and I work great together even if we are a 4 hour drive apart.

Q: You’re sharing a mutual love of industrial music so what’s your point of view about the current electro-industrial scene and do you have some kind of references (like bands, production, style…)?

Jim: I have a more American point of view of industrial. I like a lot of cold-wave and electro-industrial from the 90’s and early 00’s. We do have lots of common ground though. We both love FLA, but my songwriting is more influenced by bands like Chemlab, 16 Volt and Christ Analogue. I think when artists that work together have varying influence, it creates a special kind of diversity within the songs. I can hear all of our influences in our music. It is clearly electro-industrial but I like the punk edge within it.

Lee: I’ve been heavily influenced by a lot of ‘old-school’ stuff like Nitzer Ebb, Front 242 and of course the usual 80s suspects.

Q: I noticed you already did your first live shows with Red Lokust so how does it feel to be on stage with a new band and what’s your perception of playing live?

Jim: The “Electronic Saviors”-shows were tremendous. I absolutely loved playing these songs. I thought we were able to put together a cool light show (thanks to Lee) and put out an energy that we were hoping to achieve. This live show is only going to evolve over time and we can’t wait to get back out there.  We are looking to tour next Summer.

Lee: I’m excited to once again get on stage and I couldn’t have asked for a better front man with Jim. It was a pleasure and an honor to support “Electronic Saviors”. Really looking forward to next year to get some more shows in and hopefully by then the second album will be ready!

Q: What is the title of the album all about and in, which way did it reflect the lyrical content and your personal perception of life and the world?

Jim: Life is change. Sometimes as we grow, our relationships with our loved ones grow or disintegrate. Some things that matter one year might not matter 5 years from then. So interpersonal change over the years is, in a way, like an insect shedding its skin. I wrote these songs from that perspective. You have to deal with the consequences of your decisions and in a nutshell, that is what the album is about. It’s about the mental struggle of dealing with personal evolution.

Q: I think Claus Larsen (Læther Strip) probably made one of his best remixes ever. How did you came in touch with him and what are the elements you like on his remix?

Jim: Oh man, I love how old-school it sounds. Leather Strip has always been a major influence. I got “Fit For Flogging” in 1995. Back then, it was a lot of fun to hunt down a catalog by an artist. I did just that. I had the pleasure of meeting Claus at his big show in Philadelphia for the first time so I asked him to be on the first “Electronic Saviors”-comp. Since that time, we’ve become friends and I put out his Am Tierpark project on my label, Distortion Productions. Claus is a sweet man and I am fortunate to be involved with someone of his talent. He knocked the remix out of the park. I especially loved the vocal effects.

Lee: Yeah that remix is amazing and what’s more, he knocked it out in like 24 hours. I’ve been a Leather Strip fan for many years and have had the pleasure of sharing the stage with Claus many years ago with Aslan Faction so it was a no brainer to get a remix from him.