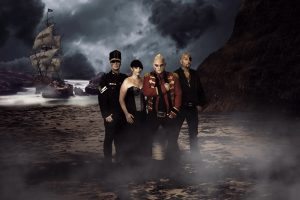 Mono Inc. became quite famous in their homeland (Germany) while the band still has to gain popularity abroad. They’re already active for numerous years now, having released an impressive number of albums. Their newest opus “Together Till The End” is maybe the work that will reach an international recognition. It’s a fully accomplished production mixing elements of gothic, dark-rock, metal and electronics. While Mono Inc. just started a new and impressive tour I got in touch with singer, creative mind and leader of the band Martin Engler.

Q: You’ve just started the “Together Till The End-Tour”. What have been your first experiences and tell us a bit more about the preparation of the tour and the crew assisting you?

Martin: The first shows were simply breathtaking for us! The fans really seem to love the new material and we are also very happy, that months of preparation and rehearsing finally seem to pay off. We are supported by a 12 people crew that really takes care of us and all those little bits and pieces that are needed to put on a show like we do.

Q: Right now you’re touring all over Germany while other dates are planned for the end of the year. Like numerous other German bands you’re a recognized and famous formation in your homeland and less recognized abroad. Is there an explanation?

Martin: It is quite simple, I guess! It took us a couple of years to get to where we are now in Germany. A couple of years of constantly recording and playing live. We started out playing in front of 2 people – and worked our asses off. We played every telephone box from North to South. And to have the same success in other countries, we would have to do the same thing there – since our music is not taking place on the radio. Up to now we just couldn’t afford the time to do that…

Q: Speaking for myself I consider “Together Till The End” as your most accomplished album ever. What kind of album did you’ve in mind and what can you tell us about the composition and production of the songs?

Martin: I am happy to say that “Together Till The End” ended out to be exactly what I had in mind when I wrote it! I wanted it raw and heavy, but still full of melancholia and melodies that let the listener coming with us ‘across the waves’.

Martin: Ronan is (i.m.o.) one of the greatest songwriters at the moment and has this ‘one in a million’ voices. And since we first met a couple of years ago we had a special relationship: based on respect for the other ones work and this thing we call sympathy. Now the time had come to put this friendship on a record and it was quite a simple story: I played “Boatman” to him and asked what he thinks. He answered: ‘awesome song, I’m in’.

With “Children Of The Dark” it was a little different: the recordings for the album were already finished and we met with the band to listen to the first mixes. When we heard “ Children Of The Dark” we realized that it doesn’t really make sense to sing it on my own (regarding the lyrics). So the idea for a cooperation with other singers was born. So I made three phone calls and within one day we had the ‘GO’ from the other three guys. Sometimes it helps, when you know some people and they remember you as ‘not being an asshole’ (laugh).

Q: One of the main characteristics –and I would say trademarks, of your music remain the strong and carrying melody lines and choruses. What’s your way of working on melodies and choruses?

Martin: When I sit down and compose I simply play what comes out of my heart and soul. And then I only stick to melodies and hooks, that really do something with me. They have to move me in a special way. If they do I know: this is worth working on…

Q: The bonus CD mainly features electro/pop inspired bands. How comes? And tell us a bit more about the piano versions featured on the ‘box’-edition?

Martin: Variety is everything! Why should we have a bonus-CD that sounds like the A-side? So I only asked friends for their ideas, who have a completely different sound and approach to our music.

The idea for the piano CD came into my head, when I was in the writing process of the album. Most of the songs were written on the piano and I thought it might be nice for the fans to hear the songs how they sound like, before all the production tools and distorted guitars join in.

Since you’re here … … we have a small favour to ask. More people are reading Side-Line Magazine than ever but advertising revenues across the media are falling fast. And unlike many news organisations, we haven’t put up a paywall – we want to keep our journalism as open as we can. So you can see why we need to ask for your help. Side-Line’s independent journalism takes a lot of time, money and hard work to produce. But we do it because we want to push the artists we like and who are equally fighting to survive. If everyone who reads our reporting, who likes it, helps fund it, our future would be much more secure. For as little as 5 US$, you can support Side-Line Magazine – and it only takes a minute. Thank you. The donations are safely powered by Paypal.
Tags: Mono Inc.