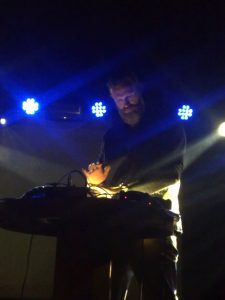 Henrik Nordvargr Björkk is an artist that has been involved in numerous, successful projects. But I know less artists dealing with different projects and becoming that recognized and famous in different music genres. Henrik Nordvargr Björkk not only is one of the 90s EBM legends (Pouppée Fabrikk), but he also –and mainly, is a kind of living legend in the dark-ambient/industrial scene. When you think about MZ.412, Nordvargr and Folkstorm (just to mention the most famous ones) you can only but agree this man is transforming every single project into sonic gold. One of his newest releases “The Secret Barbarous Names” (released on Malignant Records) is one more masterpiece and a very good reason to get in touch with this genius artist.

Q: I’ve been always impressed by the number of music projects you’ve been involved with and the number of productions you released. How do you explain this endless creativity and productivity?

Henrik: It is just the ‘flow’ I have… I constantly get ideas and concepts in my head, and I need to get them ‘out’ or they will drive me mad. I can’t explain it, it is just the way my brain is wired I guess. There are some years that I am not that creative though, and I think I have been slowing down a bit the last years.

Q: But I can easily imagine ‘music’ takes a real special place in your existence, but what does it mean to you in terms of creative expression and what are your main sources of motivation/inspiration?

Henrik: Again, I have this flow of ideas and emotions that just comes to me -sometimes triggered by things you can’t explain or see in this dimension of existence, sometimes by input from my surroundings. Of course there are more concrete things that can motivate and inspire me, like people I collaborate with.

Q: I’m wondering about the differences and nuances you make between all of the projects and are there some specificities (like instruments, gear, modus operandi) according to the project you’re working on?

Henrik: All my projects have had some specific traits that made them unique; for example MZ. 412 -always working as a team/band.

Folkstorm -ignoring all rational thought and just go with instinct etc etc… but mostly I just start working on a piece and after a few minutes I usually hear where it belongs.

Q: One of your most recent works “The Secret Barbarous Names” reveals a great match between mystic/ritual atmospheres and dark-ambient/industrial elements. Tell us a bit more about the concept, writing and production of the work?

Henrik: The decision to work with vocals and to focus on channeling the material rather than ‘classic composing’ just came to me naturally as a product of my spiritual work. I have also been reading a lot of interesting books which have inspired the process, mainly old Gnostic texts and Kenneth Grant’s Typhonian Trilogies. Texts that contain what can be called secret barbarous names have been around much longer than the old grimoires and appear in most ancient cultures, albeit called by other names. These common traits in spiritual practice fascinates me and served as the inspiration when working with this recording.

Q: What are your personal criteria to consider if an album is accomplished or not and do you sometimes change your mind when listening back to a production years later?

Henrik: Usually I just feel that ‘OK, done’ when working with a song/album, and after that I leave it be for a few weeks before listening to it again -then I always go back and polish the last few flaws I find. If you go back and rethink stuff you made years ago you would go mad, so I avoid that and think of my music as being done despite things that pop up in my head years later.

Q: You’ve worked with an impressive number of musicians/artists so what do you like in this artistic interaction and exchange plus what have been the most enlightening collaborations?

Henrik: You always get fresh input and help to see/hear things you did not know where there, and (most of the time) that can be a lot of fun. But then there are times when it does not work out so good also, so you never know; that is what is part of the charm.

I have been collaborating a lot during 2016/2017 and I have things coming out together with Romain Perrot, Thomas Ekelund and Eidulon just to name a few -all of those have been extremely satisfying and the results most awesome…

When it comes to the most enlightening collaboration I must choose Anima Nostra. Me and Margaux have truly created something special here, and I hope that people will realize this when listening to our album(s).

Since you’re here … … we have a small favour to ask. More people are reading Side-Line Magazine than ever but advertising revenues across the media are falling fast. And unlike many news organisations, we haven’t put up a paywall – we want to keep our journalism as open as we can. So you can see why we need to ask for your help. Side-Line’s independent journalism takes a lot of time, money and hard work to produce. But we do it because we want to push the artists we like and who are equally fighting to survive. If everyone who reads our reporting, who likes it, helps fund it, our future would be much more secure. For as little as 5 US$, you can support Side-Line Magazine – and it only takes a minute. Thank you. The donations are safely powered by Paypal.
Tags: EBM, Henrik Nordvargr Björkk, Nordvargr