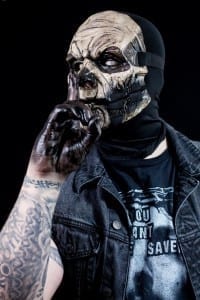 Swedish artist Fredrik Croona has been already involved in different bands, but the dark-electro driven Cynical Existence remains without a shadow of a doubt his most famous and successful formation. When I last year discovered his debut solo-album “The Grey Line” I got a real shock. Fredrik Croona explored future-pop fields driven by clear vocal parts and accomplished a real interesting composition. He this year released his new opus “Welcome Home” again on Advoxya Records confirming his talent to write cool electro-pop music.

Q: Your solo-work is an interesting move from pure harsh (h)el(l)ectronic music towards future-pop driven compositions. How did it happened and when did you start writing the first songs in the ‘pop’ genre?

Fredrik: I’ve always been into vocal trance and melodic trance and I wanted to try to fuse that with future-pop to create something that would appeal to the masses. I did some clean vocals in the past, but never really dared to take the step to start making the music. You need to challenge yourself and try something you aren’t comfortable with. The first ‘pop’ song I wrote was “Always The Same” and that was on my debut album which I wrote back in 2014.

Q: I call it future-pop and/or electro-pop driven songs, but how would you analyze the Fredrik Croona sound and what are the main ingredients of the production?

Fredrik: I call it a mix of future-pop with trance and dark-electro influences. Let’s just call it electronic music .

The main ingredients are atmospheric pads and melodies combined with a mix of singing and a few screams to make it stand out a bit and just stir it all up into a mix. I don’t want to be 100% nice , you know? lol

Q: Except the music styles, what are the main differences for you in the composition process between Cynical Existence and Fredrik Croona?

Fredrik: The main difference is the amount of people that are involved in the different projects. Remember that Cynical Existence consists of 3 people even if it’s my face you see everywhere. Even if I’m the main person you shouldn’t forget George and Erik, both are equally part of Cynical Existence as me. Another big difference is the state of mind and where I put the focus when creating a new song.

Q: I noticed an interesting evolution in the global sound production from “The Grey Line” towards “Welcome Home”. How do you see this evolution and were there some elements of the writing/production you wanted to improve?

Fredrik: To be honest I don’t really notice that much of an evolution myself. I just create and as you go on creating you learn new things and sometimes friends teach you a new trick to help you get better. I guess by creating and listening to music , you notice new things and what to improve maybe? There’s a huge difference between being the composer and the listener. You hear things I don’t and vice versa.

Q: “Welcome Home” sounds like an interesting title, like a feeling after a long travel for example. Is there a deeper significance behind the title and the lyrical content of your work?

Fredrik: The artwork for “Welcome Home” is actually a picture of my home town of Gothenburg, and when I made this album it almost felt like I’ve come back home again. I felt more secure and mature when the second album was made and that the direction was the right one for me. The debut was a bit scary, because this was all new to me.

Q: What brings the future for Fredrik Croona and the other music projects?

Fredrik: I’m currently working on my third album and hopefully it will have some interesting collaborations and tracks. And Cynical Existence’s new album “Dying Light” was just finished so next year will be the year where I hopefully go out touring a bit to promote the new album.

Since you’re here … … we have a small favour to ask. More people are reading Side-Line Magazine than ever but advertising revenues across the media are falling fast. And unlike many news organisations, we haven’t put up a paywall – we want to keep our journalism as open as we can. So you can see why we need to ask for your help. Side-Line’s independent journalism takes a lot of time, money and hard work to produce. But we do it because we want to push the artists we like and who are equally fighting to survive. If everyone who reads our reporting, who likes it, helps fund it, our future would be much more secure. For as little as 5 US$, you can support Side-Line Magazine – and it only takes a minute. Thank you. The donations are safely powered by Paypal.
Tags: Fredrik Croona