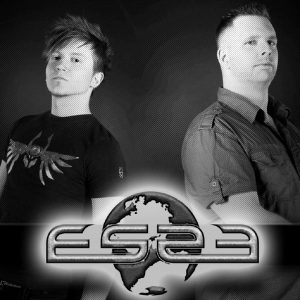 Set up in Bochum in 2004, it took a few years to ES23 to break through. The band got the opportunity to get signed on Infacted Recordings and took the dark-electro community by surprise releasing the successful official debut album “Heaven Or Hell” (2012). The sound was clearly inspired by Suicide Commando. Quite progressively ES23 moved towards a ‘softer’ and more into future-pop driven sound. That’s the global approach you can hear on the third full length “Erase Your Heart” still released on Infacted Recordings. I got in touch with Daniel Pad, the creative spirit behind the band.

Q: “Erase My Heart” definitely sounds different from your previous work. Is it all about a natural evolution from dark (h)el(l)tronics towards more melodic and future-pop driven influences or a progressive break with the past?

Daniel: In my opinion, I guess the change in style and sound comes from newer Soft- and Hardware that came into the studio from time to time. New sounds, new possibilities and more room for creativity is the main factor here. There are still some harsher elements like “Destiny”, “Get Out Of My Head” and “Once And For All”. I will not miss these elements. They might become less harsh in the future, but I will not forget my past work.

Q: So what kind of album and sound did you had in mind when starting the writing of “Erase My Heart” and what means this new opus in your evolution as musician?

Daniel: I did not have a ‘master plan’ for “Erase My Heart”. Each song of the album has its own character and all in all the album might sound like a compilation of genre-work in this scene, which I love most about it. You might say I have the right song, for the right situation. Most times I just sit there, start something and then it becomes this or that song. It is that ‘easy’ (laugh).

As always –I create– what I want to create and what comes into my mind. And with “Erase My Heart” I think I hit a good spot. Some people might miss some harsher elements, but many people like my clearer voice –and I like to use it both ways.

Q: What does the title of the album stands for and what have been the main themes that inspired the lyrical content of the album?

Daniel: The Instrumental versions of the songs were finished a lot earlier than the lyrics. They describe a situation from my past. I guess all in all each track has its own story, and many of them are related to situations of my life. I think many people have made the same experience. For example, a lost love, where you just want to end it all, or scream and find a way out for your bad feeling. But don´t worry, everything is fine; maybe  music is the way I get along with my life.

Q: I can imagine it’s maybe not an easy thing to play live some of the ‘older’ songs  (from the “Heaven Or Hell”-album) together with the new cuts. Did you maybe rework some songs and what have been the reactions so far?

Daniel: On tour with [:SITD:] I started with the clearer vocal-songs and later on they became harsher and I used the vocoder then. It has a good mixture and it worked perfectly. For example: almost every time I play “Sweetmeat” because of the 160BPM.

But you are right, it is not that easy to find the perfect setlist. I haven´t thought about reworking some songs from the past. Maybe I will. Because of the way they were produced.

Q: I noticed an interesting evolution in the artwork of your albums and especially between “Heaven Or Hell”, which was sober and “Mutatio Ex Machina” and now “Erase My Heart” being more artistic and sophisticated. Tell us a bit more about this evolution and the importance of artwork generally speaking?

Daniel: That´s easy; “Heaven Or Hell” was created by User-DX and “Mutatio Ex Machina” and “Erase My Heart” were created by Alexander Fröbel aka Pixelbreed. So the difference maybe comes from there. I trust the work and skills of those guys and I am happy about the fact that it doesn’t take me too much time in creating the artwork myself. With “Mutatio Ex Machina” and “Erase My Heart” I just gave some basic ideas, and Alex hit the spot with the perfect artwork. It is easy for me and I know I am save with the quality.

Q: Suicide Commando has been for sure a source of inspiration on your debut album while you now made a cover version of “Conspiracy With The Devil”, which will be featured on the newest album (limited edition). How was it working on this song and what did you try to inject in your version?

Daniel: I am very happy about the cover song. We also played it live once. Suicide Commando has always been a great source of awesome songs over all these years. Johan once wrote about the idea of a cover-compilation for the future and I wanted to take a song I love, and which would be not covered by everyone. He even gave me the original sample of ‘there is much killing to be done’ to make it a perfect cover version. I am very proud being part of such a great limited edition.