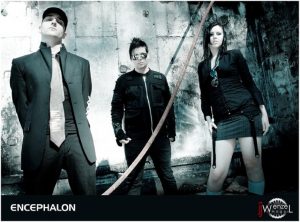 Set up in 2005 by Matt Gifford, Encephalon deals with a sophisticated electronic format featuring multiple influences like EBM, dark-electro and a kind of psychedelic, haunting electro-ambient style. The band gained some recognition with the debut album “The Transhuman Condition” (2011) and “Psychogenesis” (2015). The third full length entitled “We Only Love You When You’re Dead” released at the end of 2017 on Artoffact Records only confirms the potential of the Canadian formation. It’s an intelligent and meticulously crafted opus, which incited me to get in touch with Matt Gifford.

Q: Do you remember when and how you got contaminated by the electronic music virus and what was the sonic goal when setting up Encephalon?

Matt: Well the music virus got me first when I was 5, and I have been infected ever since.  My sister had a cheap Radioshack keyboard that had very limited sampling capacities so I was making sound collages and loops on that  from a very young age even before I heard of Nine Inch Nails. I got really into playing guitar around age 12 and started adding more and more guitar effects into my sound until I was basically making synth patches using guitar strings as oscillators. Around age 13 my current band mate Sam got his first synth and  he very quickly mastered midi so we had our first electronic band then, and I followed getting my own synths a few years later.

The sonic goal of Encephalon is hard to place,  we sort of started wanting to make a dumb EBM band in 2005, but by 2006 there was way too many dumb EBM bands so we started trying harder and incorporated more psychedelic aspects, soaring vocals, odd  time signatures, and epic song structures.

Q: You now have released your third full length album. How do you perceive and analyze the evolution in sound and influences from the previous work towards “We Only Love You When You’re Dead”?

Matt: So our first album was really about experimenting with a lot of styles, while tying it together with emotional vocals and contemplative lyrics and mild industrial influences.  “Psychogenesis” was partially a reaction to the ‘poppiness’ of the first album, while taking the advanced song structures and blowing them up to  enormous proportions, adding huge orchestras, and writing a super convoluted narrative to flow through the album.

“We Only Love You When You’re Dead” was once again a reaction to the complex sounding and outlandish nature of “Psychogenesis”. I barely did any organic sounds on the new one and went all in on the industrial influences finally, however I believe  the songs are actually the most commercial/poppy of anything I have ever written, at least structurally. I made a conscious effort not to do as much clean singing and key changes  this time, whereas that was practically our calling card before. This album was a lot more fun and easier to make  then the first two, which took 6 and 4 years to make – the new one was done in about 18 months. So in a way the new album was an intentional  de-evolution,  but I still think it sounds good.

The NEXT album will likely be a reaction to that so I might spend a decade on it.

Q: The title of the album is quite intriguing so what is it all about and what’s the possible link with the lyrical content of the work?

Matt: The mass musician die-off of 2016 certainly contributed to the theme!  Seeing so many bodies die and legends being born made me think about what it would be like if some artist like Kurt Cobain was resurrected and forced to play a pop-star for all eternity, unable to die again, and forever being cast in a spotlight as a puppet to the overlords of media consumption.

Q: The sound of Encephalon clearly sounds sophisticated, but still revealing a passion for sound research and –treatments. Can you tell us a bit more about this ‘sound’ properly speaking and do you have some artistic standards?

Matt: I’m pretty all over the place when I am writing and often don’t have much of a plan, its more like an archeological dig where I start with a small idea like a finger tip pointing out of the sand and as I slowly uncover it, it reveals a statue or monument.  Having Sam around to produce some songs and push me in directions certainly helps, I think he has a more distinct electronic sound, and I really don’t know how he does it!

Q: You claim to ‘explore themes of consciousness interacting with science fiction and technology’. Can you give us a bit more details about this aspect and what’s the possible link with the artwork of your releases?

Matt: Well consciousness has always intrigued me, I was about 8 years old the first time I asked a friend if he was really alive or just part of a simulation to test me. One of the themes of our first album had to do with imagination living beyond the mortal body. Our second album was a story about one consciousness taking over an army of self replicating machines and spreading across the universe. And our last album dealt with a consciousness trapped and tortured in an immortal body.

Our artwork that Alis crates is usually abstract and psychedelic with elements from the lyrical stories woven in. Ideally they can aid the listener into drawing their own conclusions, and they make good posters.

Matt: We have gone through a lot of changes live, but currently it is myself on vocals/synths and Alis on vocals, guitar, and synth. We have a ton of customized backing videos with our artwork animated with motion graphics to create a fairly hypnotic visual presentation. We don’t focus as heavily on our club tracks as you might expect, since fast tempos get boring to me and I think our slow building epic songs like “The Killing Horizon” or “We Only love You When You’re Dead” tend to really captivate the audience in a way that heavy and steady songs do not.