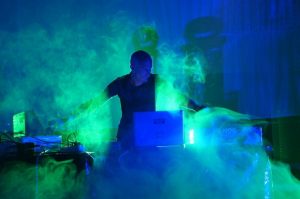 Nicolas Van Meirhaeghe aka ‘Sal-Ocin’ and instigator of the dark-ambient/ritual/cinematographic project Empusae is a Belgian artist I discovered since his early years. He also played live percussions and got involved in very diversified bands (Implant, Ah Cama-Sotz, This Morn’Omina, In Slaughter Natives, Sophia, Triarii, Tzol’kin, Ordo Rosarius Equilibrio ao.). With his newest opus (cf. “Lueur”) released on the Belgian label Consouling Sounds, Empusae took me by surprise achieving a poignant and transcendental work.

Q: Nicolas, you’re an artist I’m following since your very first official releases (on Divine Comedy Records) and I’m really impressed about the evolution in the global production process between the early work and what you’re composing today. How much of early Empusae do you recognize in your latest work?

Sal-Ocin: Thank you for your kind words. Since the beginning of Empusae, it was always about creating soundtracks for the imaginary. Certain elements in sounds and compositions you might recognise through my work such as being atmospheric, dark, melancholic melodies, ritual rhythms and a mixture of unearthly sounds and sounds and scenes from our lives (I used to sample a lot from movies, which I changed now to field recordings and recordings in my studio). In all my albums you will find out there is something beautiful within the darkness. Which is exactly the theme of my last album, literary.

Q: I experienced your newest work “Lueur” as an album with a diversified and dark sonic canvas. What kind of work did you’d in mind and how did you came to work together with Chve?

Sal-Ocin: I started to write “Lueur” as a therapeutic exorcism against a recent demon I encountered 3 years ago (genetic eye disease). I had no idea of any particular style or sonic result, it was more about transcribing emotions, fear, pain and anger into music. The result is indeed very dark but you might recognise there also is some light within. When I was at a certain point of composition, I felt something was missing. Since I didn’t know what, I experimented several ways to fill it in, but without results. After a few days it hit me like thunder: It was Colin’s voice who was needed at that passage of the song.

After he said yes to try some things out, I (re-)composed the two songs with his voice in mind. He perfectly did (even more) what I had in mind and I think the end result speaks for itself; an enhancement of the emotions I needed to express with the album. He instantly grasped the concept and it all happened very fast and naturally.

Q: I especially like the balance between music and vocals, but still the progression running through both songs, which are reaching a kind of transcendental final. How did you get such an apotheosis and do you’ve references in the genre?

Sal-Ocin: To be honest I have no idea what to compare it with. I really just did what come out during the writing of it, without thinking how I would do it and especially without any particular result. It’s the first time I used my own voice and someone else’s (except Tom De Doncker’s Vox Demonii). But it felt very natural and I need also to mention the work of  Tim De Gieter (Much Luv Studios) who did an astonishing craftsmanship in mixing the whole album into a perfect result!

Q: You’ve worked with numerous guest artists while you’ve been –and still are involved in numerous other (and sometimes famous) bands. What do you like in the work and exchange with other artists and what’s the impact on your own work and evolution as musician?

Sal-Ocin: Working as percussionist (live) with Triarii definitely helped me finding the way to compose orchestral passages within ‘Sphere From The Woods’, ‘Split’ and ‘Lueur’. Those are elements which were also present in previous albums, but not as well orchestrated and integrated in the dark ambiences and electronics.

This aspect I actually put in “Vision:Libertine” from Ordo Rosarius Equilibrio. I think Tomas (Pettersson) recognised that as well and asked me to integrate that into his songs, together with the tribal rhythms.

What I do as Tzolk’in (with Gwenn from Flint Glass) is something similar as with Empusae in the sense that we create a soundtrack to the pre-Colombian civilisations.

With Onus (with Peter Bjärgö from Arcana and Sophia) it is for me the same principle: creating atmospheric music based on the burden of life.

Q: What means this artistic involvement and creation to you?

Sal-Ocin: Some people have kids, Christel and I have art. It is more than just a passion, it’s our drive of life, our therapy, our essence of life and our catharsis. It’s an obsession, an endless source of pleasure, commitment, self-development, symbiotic interactions.. In other words, hard to describe, but it means the world to me.

Q You’re right back from WGT 2017. How did it happen for you and what’s the importance of playing live plus did you see other interesting bands on stage?

Sal-Ocin: WGT was very intense this year. The Empusae gig was in a full house ‘Volkspalast Kantine’. The sound was amazing, so was the audience, they were very silent (which is not always the case and can be a huge pain in the ass during ambient parts of a concert) and attentive with a huge feedback from then at the end. It’s one of the concerts where myself as well as several people in the audience started crying.

A few hours later we performed in ‘Volkspalast Kuppelhalle’ (full house as well) with Orde Rosarius Equilibrio. One of those concerts where I had a big smile on my face at certain moment and where I had so much fun playing my percussions. Unfortunately, I didn’t visit any other band or venue, I decided to spend some feel good quality time with the band and friends.

Since you’re here … … we have a small favour to ask. More people are reading Side-Line Magazine than ever but advertising revenues across the media are falling fast. And unlike many news organisations, we haven’t put up a paywall – we want to keep our journalism as open as we can. So you can see why we need to ask for your help. Side-Line’s independent journalism takes a lot of time, money and hard work to produce. But we do it because we want to push the artists we like and who are equally fighting to survive. If everyone who reads our reporting, who likes it, helps fund it, our future would be much more secure. For as little as 5 US$, you can support Side-Line Magazine – and it only takes a minute. Thank you. The donations are safely powered by Paypal.
Tags: Arcana, Empusae, wgt