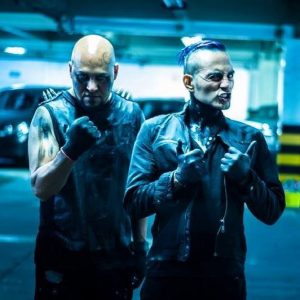 C-Lekktor progressively became one of the leading formations at the wider fields of dark-electronics. Master mind Marco Antonio Barrientos (Markko) has been busy experimenting and releasing music for his side-projects Circuito Cerrado and Kromak, but now strikes back unleashing the fourth official full length of C-Lekktor. “Out Of My Way” also is the first album released on DWA (Digital World Audio) and will ravish all electro heads and fans of the band. This album will only increase the status of the band. I got in touch with the always friendly and accessible front man to answer a few questions.

Q: After the previous C-Lekktor-album (cf. “Final Alternativo”) you were busy releasing material for Circuito Cerrado and Kromak. How does it feel to strike back with your ‘main’ project and the new album?

Markko: I really needed getting back to C-LEKKTOR, which really reflects a lot of very different feelings and thoughts from my daily life. This new album stands for the accumulated energy that was inside me. I feel alive!

Q: Can you tell us a bit more about that and are there some new music elements you tried to incorporate in the production?

Markko: Actually when Jorge and I started working on this new album, we talked about the idea to return to the old structure of the songs we like from the first albums, but we wanted to experiment with some fresh sounds. So this is the result of the ideas we got in mind. We wanted to please our fans all over the world who were missing the ‘old’ sound, but on the other hand we also tried to please the people who liked the sound of “X-Tension In Progress”. So I think we are somewhere in the midst (laugh)

Q: I experienced “Out Of My Way” as your most diversified work; moving from EBM to dark-electronics to industrial-trance. What have been the main sources of inspiration to compose this new work?

Markko: Thanx for the words, that’s really appreciated. The main basis for this new album definitely was our first two albums.. We somewhere changed ideas and technical skills on the latest album so we wanted to recover our old sound formula, but we love music and we enjoy listening to it; new and old music. So I guess we used different ingredients to get and different flavor on this new album (laugh)

Q: Next to the ‘regular’ edit, the album has been also released as a so-called ‘audio-book’ featuring a bonus disc. Tell us a bit more about this concept, the artwork and the bonus disc featuring hard-hitting songs?

Markko: Jamie from DWA is always putting great efforts and passion in everything he is doing. We didn’t only notice his interest in our music, but still a real friendship and total support in the products he is realizing. We already noticed it with the 7″ vinyl of  “Radioakktivity” and now with this gorgeous version of the album on digibook. We feel so proud of it; the artwork was done again by DJ/VJ Psyklon and I can tell you this time it was not a deception at all. He immediately caught the idea and concept we were looking for and ‘bang’ there it was.

About the extra songs on the bonus disc the answer is quite easy. We had too much songs so they couldn’t all be released on one disc and decided to put the songs on a bonus disc.

Q: You in 2015 did a noticeable cover version of Kraftwerk’s “Radioactivity”, which I think is a real great dark-electro version of this legendary song. How did it feel to cover such a great band and do you’ve other songs in mind you would like to cover?

Markko: I can’t say if it is a good cover version or not, but I just wanted to pay tribute to one of the bands that changed my life and turned my way into the right music. I didn’t only make covers of Kraftwerk, but still a few more from bands like Depeche Mode, Suicide Commando, Front 242, Hocico and a few more… cause all these bands are in my mind and my ears… and now that you say it, I feel so honored that you like it… It means that not everything I’m doing is shitty (laugh).

Q: Together with Hocico and Amduscia, C-Lekktor is without a shadow of a doubt one of the leading dark-electro bands from Mexico. How does it feel to have reached this status and what’s the relationship with other Mexican artists?

Markko: Well to be honest, I’ve never thought about this, but thank you for this great compliment. I think every band or project has its own place and I don’t compose music for a competition or so, it was never my intention to get a place or number on anything… I’m actually not looking for fame, I’m just a guy trying to share the sounds that are living in my head and my heart. I’ve a lot of respect and admiration for each of my country mate musicians, but also for all the other artists all over the world.