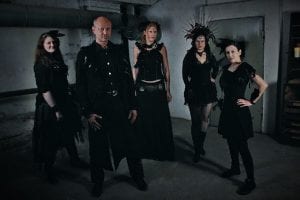 Set up in 1990 and driven by Thomas Gäbhard, Arcana Obscura directly caught my attention by its first and self-titled full length-album. Back in time the band was clearly into the electro/EBM approach from the 90s. But quite progressively the sound started to evolve, revealing new influences. Early this year the band stroke back with a new line-up releasing the album “2000 Miles”. The work –as always released on ConSequence Records, revealed a beautiful fusion between electronics and acoustic instruments with elevating- and ethereal vocals on top. It’s a styled creation, which I personally consider as the most artistic work to date. This is what Thomas Gäbhard has to say.

Q: The album “2000 Miles” has been released several months ago now, but this new opus also was the first ‘new’ Arcana Obscura album in years. How does it feel to be back and what happened after the “Lemuria”-album (2010)?

Thomas: After the “Lemuria” album, the paths of my former singer Sabine and me separated, so I had to reorient myself.

Afterwards, the reissue of the already long out of print album “Pain” came out in 2013 with 8 bonus tracks and after that I found fantastic new singers (Andrea, Betty, Timéa), with whom I was working with wild enthusiasm on new songs.

Finally, in mid-2017, the album “Tempus” was released, this is a wonderful retrospective of the last 6 years and united for the first time all singers on one album. There were new songs with the new singers and some remixes of older songs with the past singers.

At the turn of the year we released our current album “2000 Miles”, on which you only hear one of the singers, Timéa Göghová. She always had an affinity to exotic, Eastern European-, but especially oriental singing styles. This is what she tried out on the album, and I must say that it’s fully accomplished. The songs “Bahar” and “2000 Miles” are truly oriental.

Meanwhile we have grown together to a great team, and it feels good, strengthened again to work on new songs and stage shows together. The next album will be released in the middle of next year, then again with all current singers.

Q: “2000 Miles” features old songs that have been reworked next to new compositions. Why did you make this ‘mix’ and how was it working on the ‘older’ songs? What did you try to improve/change?

Thomas: We’re playing these songs live so new and different versions of older songs were constantly developed, which I next adapted to the style of singing. New vocalists also bring other possibilities to experience with. I realized there’re was more and more demandfor these versions so after our shows, and especially with Timea, I decided to release the album “2000 Miles”.

Q: I experienced “2000 Miles” as your most open-minded work, which is featuring multiple influences and instruments. What is the album (referring to its title) all about and how do you see this work compared to the early Arcana Obscura stuff?

Thomas: I think you keep evolving with the opportunities that are coming up, especially with the help of our two multi-instrumentalists Betty and Andrea, I am now able to integrate more acoustic instruments, and since Timéa has the affinity to the sounds of foreign languages and singing styles of different nations, we have accentuated and extended the subject of foreign languages.

I think, she would like to continue this way, maybe adding Russian, Serbian, Maori or even Chinese. Let‘s see, what the new album brings.

“2000 Miles” is not a concept album or a theme that works, it’s more about blending cultures, languages and influences. The title song “2000 Miles” refers to the situation in Syria and the flood of refugees.  (2000 miles is the distance between Aleppo and Germany, rounded up) and “Agba Wäeh” is a traditional song from Benin, adapted by Arsené De Souza, a drummer and painter, who lives in Münich and knows Timea. She made a new adaption of it for Arcana Obscura.

Clearly, the current direction of the music continues to move away from the EBM origins of the early days, although I have always had elements and influences of world music in my music.

Q: Your music always has reflected some intimate atmosphere, which I think is not always that easy to transpose on stage. How do you manage this essential element and what does it mean to play live?

Thomas: In fact, this is often very difficult. Because of that we work a lot with dancers and fire artists, but we also need suitable stages and locations to achieve the desired mystical atmosphere. Also the timing is important, it is very difficult to create a magical mood on a sunny afternoon. But we always come up with new ideas in order to offer our audience the most exciting stage show possible.

Q: You already mentioned the last year released “Tempus”-album, which was a kind of look back. Why did you feel the need to release “Tempus” and how do you look back at the Arcana Obscura-career so far?

Thomas: “Tempus” was not produced as a ‘best of’ album, but as an overview of the songs written in the time after “Lemuria”. So it´s more a kind of period document.

About the career… well, there have always been highs and lows, but you have to make the best of it. As long as it’s still fun and you can see how the audience is fascinated, we will continue.

Q: You’re still running ConSequence Records, but you no longer release other bands. I can imagine it has all to do with the decreasing interest for CD sales. How do you look at this evolution and at the other hand the rise of streaming platforms?

Thomas: Yes, I’m continuing my label ConSequence Records, but without releasing other bands, it just does not make sense anymore.

CD sales virtually doesn‘t exist any more, even the download market has evaporated, there is only streaming today, and there is not really money for that.

But you still have to finance your music after all, and it’s not easy without resources. But at the other side you now have the advantage, that you’re music is audible to people all over the world.

Since you’re here … … we have a small favour to ask. More people are reading Side-Line Magazine than ever but advertising revenues across the media are falling fast. And unlike many news organisations, we haven’t put up a paywall – we want to keep our journalism as open as we can. So you can see why we need to ask for your help. Side-Line’s independent journalism takes a lot of time, money and hard work to produce. But we do it because we want to push the artists we like and who are equally fighting to survive. If everyone who reads our reporting, who likes it, helps fund it, our future would be much more secure. For as little as 5 US$, you can support Side-Line Magazine – and it only takes a minute. Thank you. The donations are safely powered by Paypal.
Tags: Arcana, Arcana Obscura, EBM