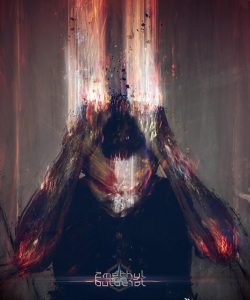 2Methyl was previously known as 2methylbulbe1ol. Set up in 2008 by French artist Nicolas Druoton the project developed an intricate, intense and particularly sharp sound, which found its inspiration in the sonic realms of dubstep, d’n’b, IDM, industrial, ambient and even jazz. 2Methyl released multiple EP’s while the debut full length “Layer 8” (2015) released on Ad Noiseam was an intelligent and successful work. 2Methyl is now back on track unleashing the brilliant and visionary “Etched” on Agnost1k Recordings. The CD format is strictly limited, but I can assure you it’s a real artistic piece you simply want to get in addition of your collection. Time to know a bit more about this great project.

Q: I think you’ve been involved into other music genres before you set up 2Methyl, right? Tell us a bit more about your music background and how did you get in touch with electronic music, which finally lead you to found 2Methyl?

Nico: Basically it’s the pretty common ‘rock – metal – electronic music’ trajectory. I took classical guitar lessons during my childhood for about 10 years. I switched to electric guitar and really discovered electronic music when I wanted to program drum patterns. It’s a strange way because it really comes from gears. This piece of equipment can make this kind of sounds, this sampler is handy for jungle… Ok but… what’s jungle music? Interesting! And I started writing tunes, experimenting things and instead of switching my amp on, I pressed the drum-machine button.

Q: It maybe explains why I experience your music as an osmosis between numerous genres such as industrial, electronics, IDM, dubstep, d’n’b and even a flavor of jazz on the new work. How would you analyze your own sound and what are for you the most important aspects of this sound?

Nico: I don’t really listen to electronic music and I’m not stuck in a kind of genre. I’m more into building an atmosphere. Is it slow, is it broken, is it peaceful? And I picked an appropriate style of music.

About my own sound, for me it’s all about density, usually lot of layers and focalizing on low end. I like when the tune is like a mechanical system. Something happens and something else reacts to it. The most important aspect to me is to achieve something immersive, when you can fell you’re in middle of something.

Q: What can you say about the evolution and eventually changes from your early work and the debut album “Layer 8” towards the new album “Etched”?

Nico: The landscape is not the same. For each EP or album I try to describe a distinct environment. “Layer 8” was synthetic and ‘futuristic’. For “Etched” I wanted something more ‘Lo Tech’ and natural. So I cranked up the distortion and lower the tempo. So I don’t know if it’s an evolution. It’s something else.

Q: Tell us a bit more about “Etched” regarding elements such as writing/production/mixing process, equipment you used etc?

Nico: On stage I sometimes perform with my friend Youlé who played the drums. We adapt existing tunes to make it playable and work more as a rock band. This process and sessions of ‘training’ were like a big inspiration to me. So for this album I wrote some drum parts and we recorded it on a real drum-set.

I wanted a more ‘acoustic sound’, a process less ‘in the box’, with just a computer. I used instruments (guitars, custom made instruments by Youlé), field recordings, modular synths and a good amount of distortion and reverb.

Q: The ‘industrial’ package of “Etched” is absolutely artistic and I can imagine a kind of ‘dream’ for an artist. Tell us a bit more about this concept and what does it mean to you?

Nico: Yes it’s awesome! I really like the fact you have to deal with 4 screws before you can finally access to the CD. It’s a massive box with golden metal parts manufactured by regional craftsmen, including a social company who support handicap in Switzerland. The artwork was made by Okiko who put pictures on my music for 10 years now.

it’s Agnost1k Record’s physical response to the digital world. For me it means a lot. As a musician I’m really proud to have my tunes in a gorgeous package like this, and as music lover it’s heartwarming seeing a label putting this amount of work to promote artists work.

Q: You also released a few EP’s on vinyl format. What makes the attraction of a vinyl format in times where people are mainly using streaming platforms?

Nico: According to a study, something like 50% of people who buy vinyls don’t even listen to it. So obviously it’s not really just about listening to the music. It’s collecting nice objects, 12” artworks, colored pieces of plastic, showing some love. Maybe it’s also about the ritual, pick the disk, put it on the turntable.