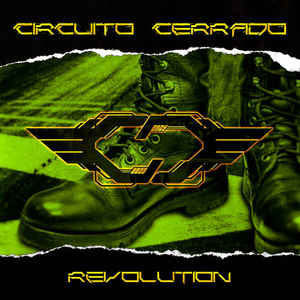 Background/Info: Markko B. better known as the sound operator and voice behind C-Lekktor strikes back with his ‘industrial’ side-project Circuito Cerrado. “Revolution” is a 4-track teaser announcing the upcoming third album “Furious Basslines”.

Content: The title song is a heavy and punching electro-industrial cut driven by a hard-hitting kick and a solid lead. The song has been also remixed by Binary Division. Both remaining cuts are remixes from songs that will appear on the upcoming album. Acylum and the Mexican project Fabrikmutter have been asked to accomplished a remix as well.

+ + + : No doubt about it, the title song is the right one to get released on EP. It’s a killing dancefloor cut creating a perfect sonic fusion between industrial- and dark-electro music with a technoid touch on top. Among the remixes I especially want to mention a great job done by Binary Division, but the best remix is the one by Fabrikmutter.

– – – : I experienced previous work by Circuito Cerrado as more ‘industrial’-like and that’s maybe an element I’m missing here. Acylum didn’t accomplish its most efficient remix, but there’s no reason to complain.

Conclusion: Marrko B.  Is one of those contemporary electro-wizards changing everything he composes into sonic gold. This EP is a real juicy appetizer to welcome the new album.