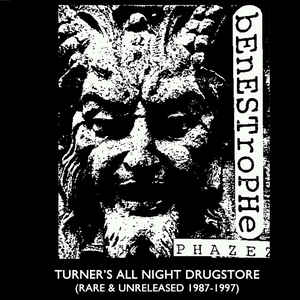 Background/Info: Set up in the late 80s by the Dassing brothers (Mentallo & The Fixer) and singer Rich Mendez, Benestrophe released two noticeable albums in the 90s on Ras Dva. Quite recently Gary Dassing found a box with forgotten and previously unreleased material from Benestrophe, which also was the first project from the Gary- and Dwayne Dassing.

Content: Next to previously unknown songs the album also features alternative mixes from familiar songs such as “Pig Butcher”, “Ritual”, “Sleep Tonight”. But the album is first of all a way to get back to the very specific sound created by the Dassings. The sound clearly remind to the complexity they later on revealed as Mentallo & The Fixer. It’s a dark and sophisticated sound, which might appeal to early Skinny Puppy-fans, but with this little extra and very personal characterizing the song of this band. The most sophisticated songs also have something IDM-like.

+ + + : Benestrophe is a band that didn’t get a deserved recognition, but let’s not forget they were active in the late 80s and early 90s when the electro-underground scene was mainly dominated by European formations. This album brings all the intelligence of the Dassing brothers alive. It’s a real pleasure to (re)discover a great song such as “Ritual” in a different version, but also “Sleep Tonight” and “Pig Butcher” (another familiar cut).

– – – : The sound quality is not the most professional one, but this album has to be only seen as a sonic documentary emerging from the Gary Dassing archives.