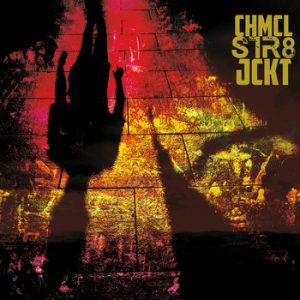 Content: You rapidly will recognize the rather typical American ‘industrial’ style, which might evoke the early years of Ministry, Skinny Puppy and co. It’s a harsh industrial sound dominated by industrial guitar riffs and accomplished with electronic arrangements. A few tracks are more into electronic music, injecting an extra EBM touch to the work. It sometimes remind me of Birmingham 6, but globally speaking “Chmcl Str8jckt” remains industrial-like and even moving on the edge of metal.

+ + + : This is an interesting debut revealing band with a real potential. Chmcl str8jckt convinced me by their empowering guitar parts, which have been joined by cool electronic arrangements. I especially the “House Upon The Hill”-song, which sounds a bit more electro-like and maybe a bit more personal. Another main characteristic is the programming of the drums. You sometimes get the impression of hearing a real drummer playing. Last, but not least I also have to say a word about the great digipak format revealing the artistic approach of the band.

– – – : There are many positive points about this album, but you still can hear this is a debuting band. Some songs are missing that little part of production work, which could make a song successful. I now heard cool cuts, but not really one I’ll keep in mind.

Conclusion: This debut work of Chmcl Str8jckt revealed interesting ideas the band now will have to elaborate. This band has something for sure!

Best songs: “House Upon The Hill”, “The Fell Apothecary & The Sodomy Narc.